Over the past few years, The National Snow and Ice Data Center (NSIDC) has built some impressive Google Earth files, such as the Wilkins Ice Shelf Collapse.
They’ve now released a project titled “A Climate Change Tour of Cold Places“, which was created as a collaboration with the University of Colorado at Boulder School of Education. The 12 minute tour is narrated, and features a variety of photos and videos along the way. They call it a “tour of the snowy and icy regions of the world covering sea ice, glaciers, ice shelves, and permafrost“. 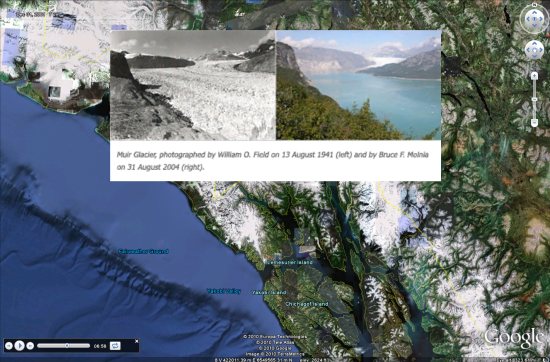 You can download the KML of the tour here

. For details about the data behind the tour, they have a comprehensive data sheet available. For more information, simply visit their site.

The news came out just a few days ago that the last remaining bridge of ice connecting two islands in Antarctica disintegrated and the Wilkins Ice Shelf is now just a pile of broken ice. Now, the National Snow and Ice Data Center (NSIDC) has released a Google Earth time animation showing satellite photos of the break-up of the Wilkins Ice Shelf over the past few weeks, including the final bridge collapse. You can watch the time animation of the photos of the collapse here

(600 Kbytes). After the file loads, just hit the play button in the time slider that appears in the upper left of Google Earth. This and other interesting Google Earth content is available at the NSIDC site. 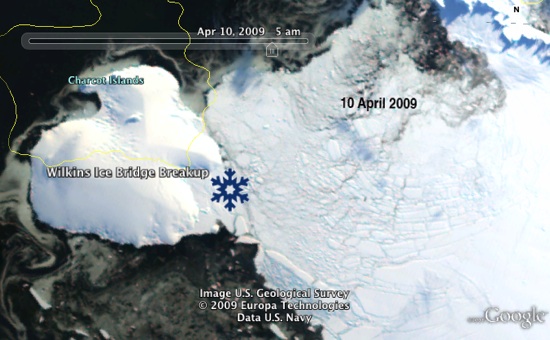 via OgleEarth
Related: Arctic Ice Melting Animation
[UPDATE 22-April: Thanks to some suggestions I made, NSIDC reduced their file size on the above GE File from 17 MBytes to 600K – they liked my suggestions. 🙂 They had full-sized PNGs. I suggested smaller JPG files instead.]

Google Earth is probably the best way to view the evidence of dramatic climate change in the form of glaciers. The reasons being that Google Earth has the best collection of satellite and aerial imagery, it has 3D terrain, there are many user-generated photos of the glaciers, and there are many collections of placemarks from scientists showing photos and video evidence of the changes.
Most recently, Google has announced a collections of placemarks from the Extreme Ice Survey project which includes dedicated scientists and extreme photographers who have been placing time lapse cameras around many glaciers and recording the dramatic changes, sometimes in just the course of a few months, of these glaciers which have been around for thousands of years. You can see the collection of placemarks of the Extreme Ice Survey here

. Here is an example of the videos found in the collection:


AK-03 Columbia Glacier from Cliff from Extreme Ice Survey on Vimeo.
Google Earth 5 has a feature called historical imagery which lets you see other imagery for the same location. Unfortunately, many of the glaciers in the Extreme Ice Survey do not yet have much in the way of historical images. However, other people have created glacier KML files which show changes over time. See for example this collection by GEC member ‘blt’: Glaciers Melting, another story showing some data from the National Snow and Ice Data Center (the NSIDC has lots of Google Earth content).
And, for the most dramatic view of climate change visible in Google Earth, I highly recommend viewing the NSIDC view of ice melting at the arctic and antarctic poles from 1979 to the present. 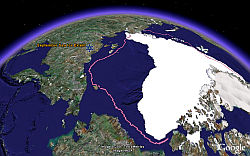 The ice in the Arctic officially reached the summer minimum on September 12th after a blazing summer in the North. The ice reached the second highest minimum in recorded history just a bit less than 2007 where almost half the ice disappeared off the cap of the world. Read the official post from the National Snow and Ice Data Center (NSIDC). The NSIDC has produced a number of excellent animations for Google Earth depicting real-time analysis of the amount of ice on both poles over time. Using a demarcation line of the average ice melt extents over the past few decades as a reference, you can compare the current levels and see just how bad the melting has been the last two years.
The NSIDC has now updated their animations with better coverage and twice the resolution of detail. Try the 30-day animation

first. If your computer and video card have plenty of memory, then you can try the 60-day