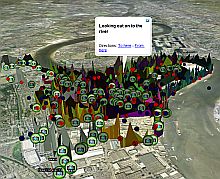 What happens when you merge art, science, volunteers for an experiment, GPS, a Galvanic Skin Response (GSR) device, cameras, Greenwich and Google Earth? An emotion map of people living and working and what they see and feel. This is one of the most amazing multifaceted applications of Google Earth I’ve seen yet!
I found this last night through this blog entry. The blog called the Westcombe Society says it is a local amenity group which aims to foster community spirit and protect the character of the area between Greenwich Park and other nearby areas. Apparently they have a very innovative sub-committee which produced the emotion map. They have created the emotionmap.net web site which describes the progress and provides the Google Earth network link of their emotion map

. The key to the project is the Biomap Device which allows the wearer to record their Galvanic Skin Response (GSR), which is a simple indicator of emotional arousal in conjunction with their geographical location. The volunteers also use a GPS, a digital camera, and somehow take notes of their feelings at particular points as they move about the environment of Greenwich, England. It’s nice that Greenwich has particularly high resolution aerial photos in GE.
Once you load the emotion map

, you will see a lot of information. You are seeing all the data for a dozen or so people. The camera icons show the photos they have taken, if you tilt the view you see the “graphs” in different colors showing the emotion indicators for each participant. You can reduce the clutter by going to the Places area and right clicking the main folder “Greenwich Emotion Map” and selecting “Hide Contents” (this turns off everything). Then I suggest you select a particular person and turn on their photos and Bio Mapping Walks. You can also turn on all the waypoints. As you turn on each person, you can follow their Emotion map. Amazing! Digg it!
(By the way, they used RoboGeo to merge the GPS, photos, and maps.)