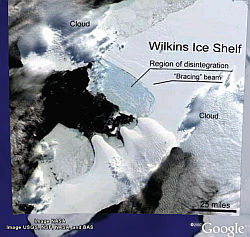 A few days ago, the National Snow and Ice Data Center (NSIDC) released dramatic imagery showing a huge portion of the Wilkins Ice Shelf in Antarctica, 13,680 sq. km in size, which broke off and began disintegrating a few days ago at the end of the Antarctic summer. This is another dramatic instance of the huge ice melting at both poles of our planet. The new ice in the water will have a temporary effect of cooling the nearby waters (just like ice in your drink), but as it melts – and if the temperatures continue to rise – the ice melting will only accelerate in the coming years.
Stefan at OgleEarth took the NASA photos from the NSIDC and created a couple of image overlays

so you can see the view of the ice shelf break-up right where it happened in Google Earth. And, you can grab the transparency slider beneath the Places pane to compare the new photos to the base imagery in GE. Stefan’s post also shares a YouTube video showing a flyby of this huge ice break-up (note that the cliffs of ice are 60+ feet tall!):

. This animation lets you see the extent of sea ice for either September or October from 1979 through the present. The pink lines show the normal average ice extent. Look at this past September 2007 ice extent report for the Arctic region for the dramatic drop in ice last summer (read GEB post on this). Hopefully the NSIDC will add the March 2008 update to this file soon.