We recently came across this interesting article about counting whales using DigitalGlobe’s satellite imagery. Unfortunately the imagery in question has not made it into Google Earth. We have several times, without success, searched through satellite imagery of Hermanus, South Africa, a popular whale watching location where Southern Right Whales come to calf every year. So, we did an internet search and found remarkably few sightings. We believe this is due to a combination of factors. Google Earth does not show much satellite imagery beyond a thin strip of ocean along the coast, and when it does, the resolution is dramatically reduced. Also the resolution of most satellite imagery is barely good enough to identify whales.

Here are the only finds we know about: 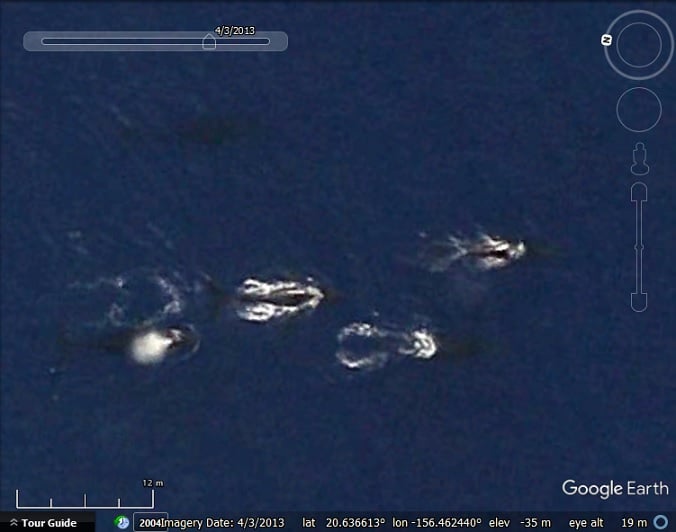 Off the coast of Maui, Hawaii. Found via twistedsifter.com. 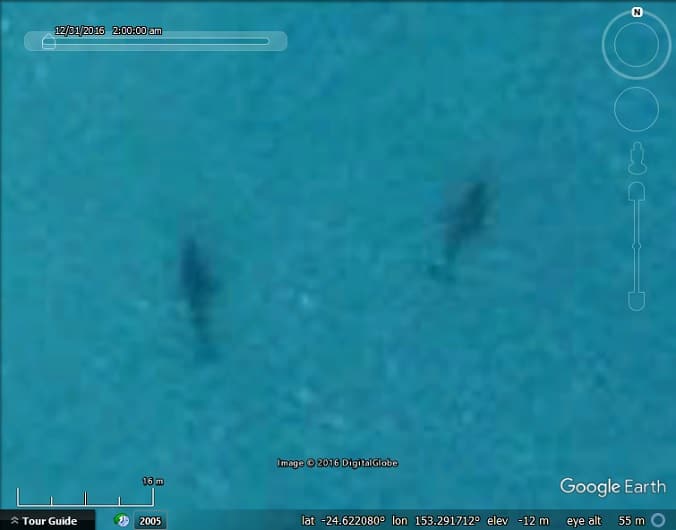 Unknown species off Fraser Island, on the Eastern coast of Australia. Found via artcepts.blogspot.co.za. 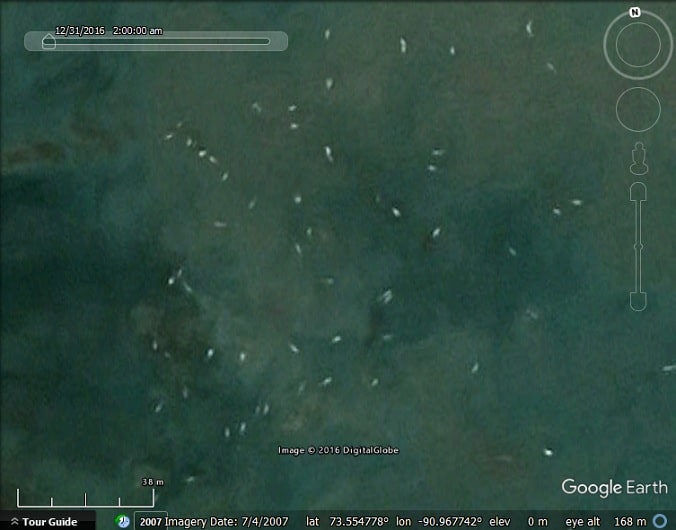 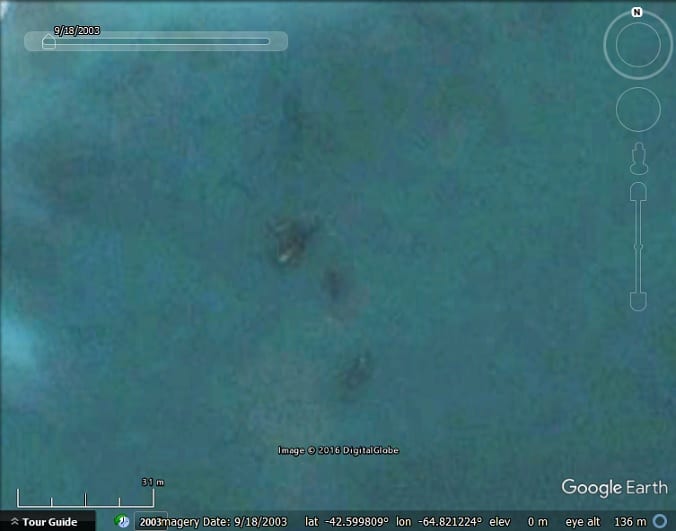 If you know of any other whale sightings in Google Earth, please let us know in the comments.

“The Floating Piers” was an artwork by artists Christo and Jeanne-Claude on Lake Iseo, Italy, from June 18 to July 3, 2016. It is now visible in Google Earth. 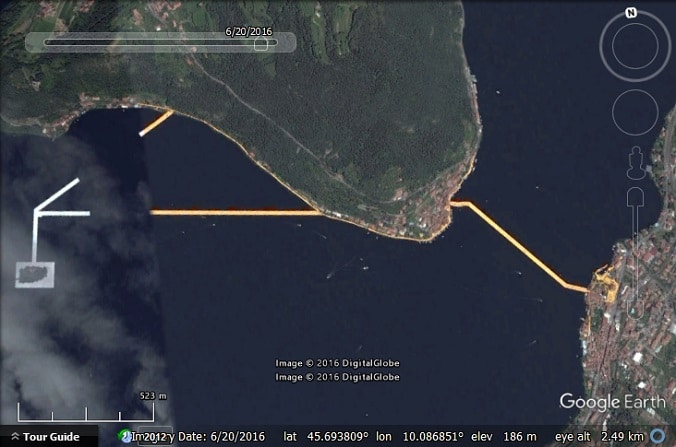 The imagery on the left is older and shows the project still under construction. 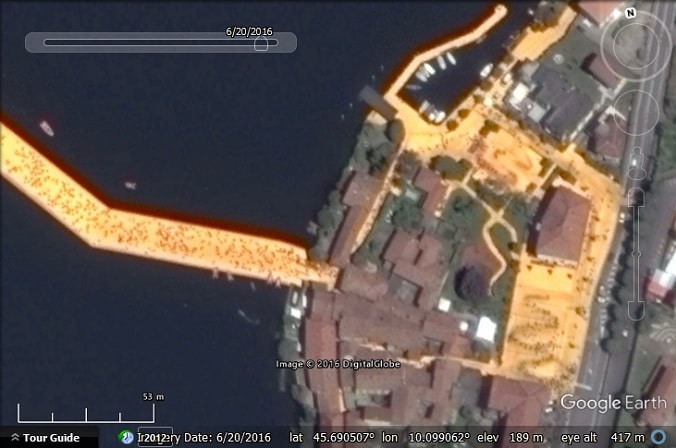 We can see people crossing the walkway and others queuing.

See the official artists website here. One of the artists Jeanne-Claude, died, aged 74, on November 18, 2009. According to Wikipedia the artists began conceptualising the project in 1970. According to the web site the floating piers consist of:

From June 18 to July 3, 2016, Italy’s Lake Iseo was reimagined. The Floating Piers consisted of 100,000 square meters of shimmering yellow fabric, carried by a modular dock system of 220,000 high-density polyethylene cubes floating on the surface of the water.”

Although the artists have created a number of large scale art works since the 1960’s, the majority of them do not appear in Google Earth as there is not much imagery from that time period. However, we did find one other artwork, “The Gates” in Central Park, New York in 2005: 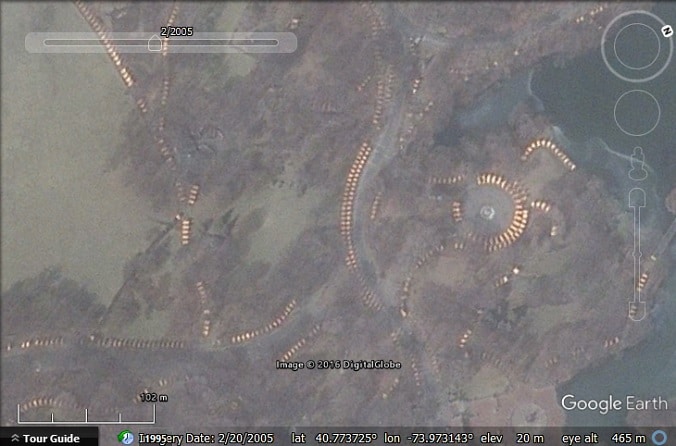 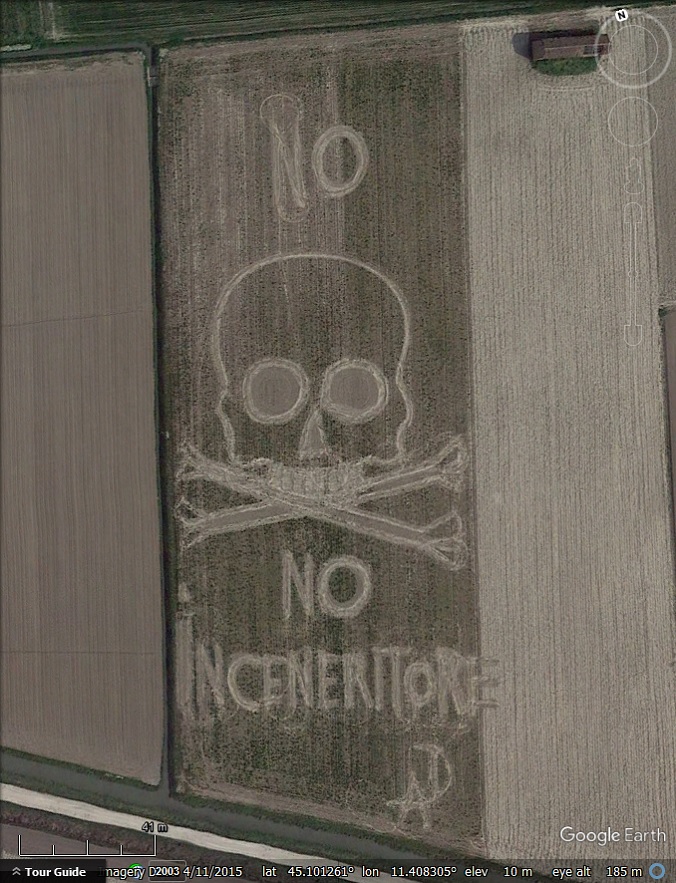 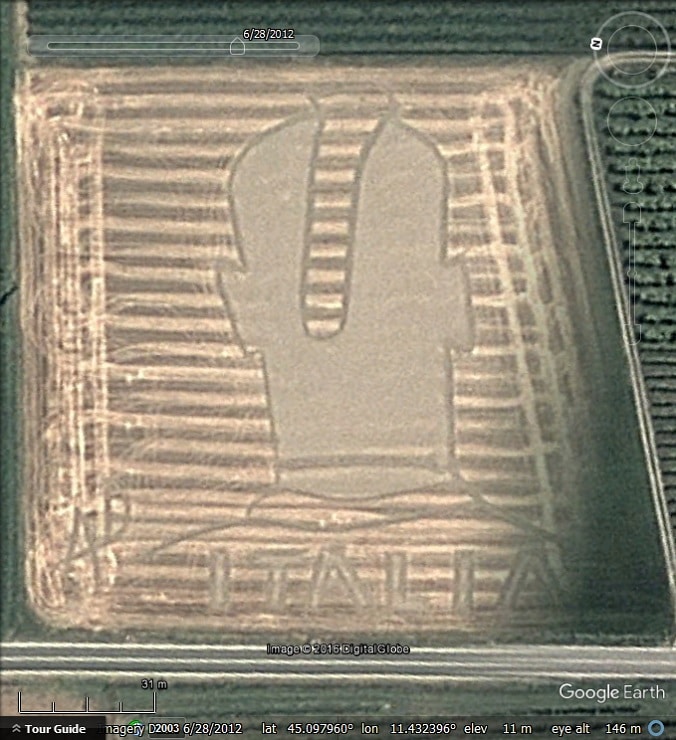 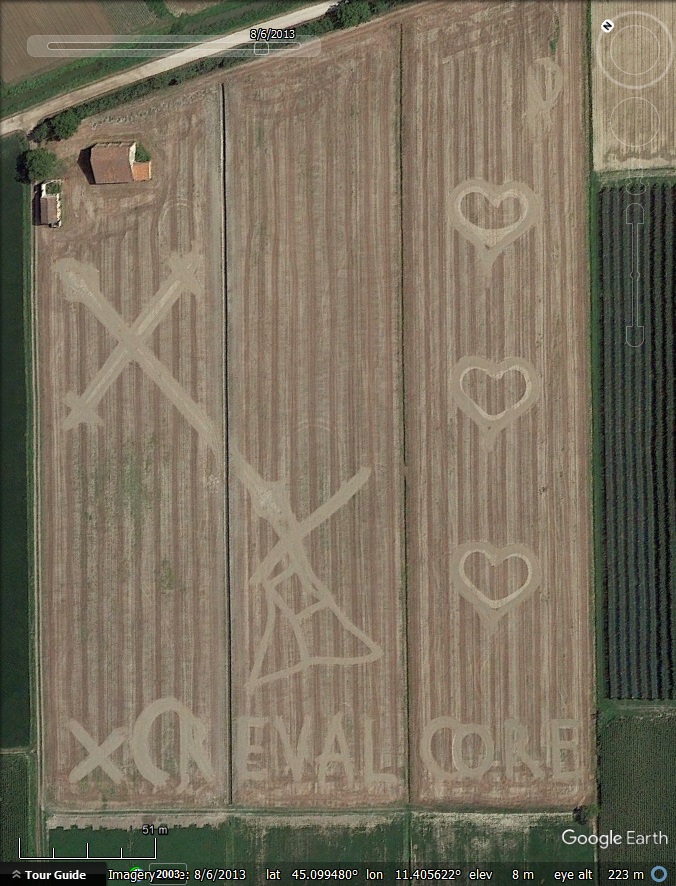 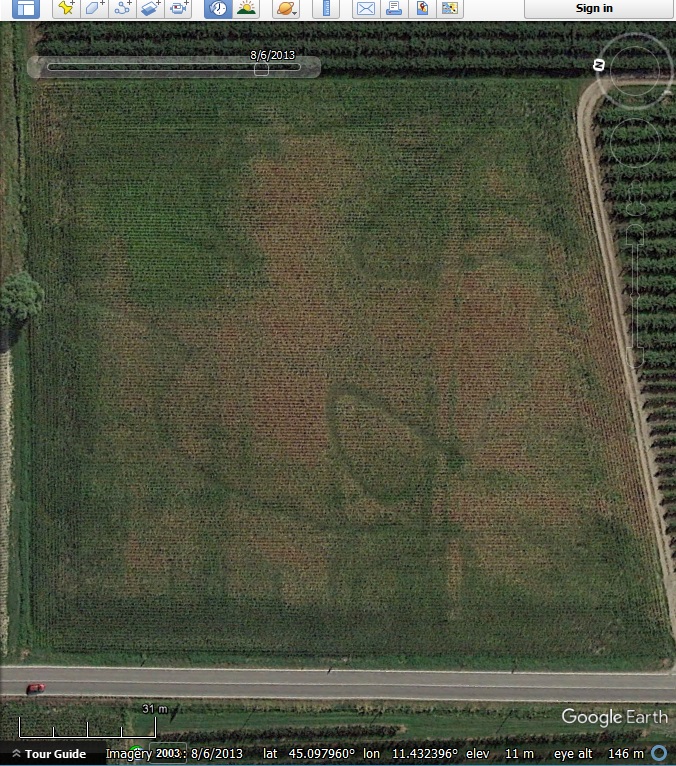 Google has released a free new version of Google Earth on a totally different computing platform: Virtual Reality (VR). Google imaginatively calls it Google Earth VR. Specifically, for now, this version is for the HTC Vive which is the only consumer platform with dedicated 3D controllers for interacting in VR. Download link for GEVR (from the official Steam page). You can watch the Google Earth VR demonstration video from the Google announcement below:

Based on my reviewing it today, Google is taking great advantage of VR with the new version. You can view the Earth, and all its places, in an entirely different perspective. Because, now Google Earth’s 3D content is fully stereoscopic 3D, and immerses you in cities, valleys, mountains, etc. You can use the 3D controller to fly yourself around, or drag the sun to get a different sun angle, or see the stars at night above your chosen landscape or city. Google has chosen to give you a non-human scale, so when you are viewing places like cities – you feel like a giant who can reach out and hug a skyscraper, or give a hug to Half Dome or the Matterhorn. Since the Vive allows you to move around your room, you can literally walk around mountains, canyons, buildings, and more. [EDIT: It is possible to change setting in the menu options so you can feel more human scale sized].

Google starts the program by offering you a basic tour which flies you to several well-known locations on Earth. The first time you experience it, you will probably have a strong “Wow” feeling as the scenery is stereoscopic 3D, and you can look in any direction. I sure had that reaction myself! In addition, Google uses 3D audio and music for the tours. In some places you hear city street sounds, in one you hear the church bells of a nearby cathedral, and in nature shots you might hear some wind or car noises from a nearby highway. It definitely adds to the realism of the scenes.

After the tour, you end up with a full view of the Earth in space (an amazing experience), and are then given tips on using the controllers to drag the Earth, and fly down to see whatever place you like. You can also pop up a menu that gives you choices of other tours, and selections of cities and places you might want to visit. The controls also enable you to take screenshots. One of my favorite features is that you can point the controller at the sun and drag it across the sky, or below the horizon to make the sky switch to night (where you will see the stars and milky way in all its glory).

There’s more to learn about the interfaces than you might first realize. One surprise I got is that if you point at the controller in one of your hands (the one which shows a globe with the current position) with the other controller, the globe grows to a larger version of the Earth with a pin showing your current position. You can then use the other controller to rotate the earth, and point at a rough position on the globe and drop a new pin to fly to that location. This is a very cool feature and immediately reminded me of the scene in the book “Snow Crash” by Neal Stephenson, that one of the original developers of Google Earth said was originally an inspiration for the first version of our favorite program.

It’s great to see Google finally release something new and exciting for Google Earth. A new version of Google Earth has been rumored for over two years for the desktop/mobile platforms that will be a complete re-write. But, we have yet to see even a test version in the wild for the new Google Earth. So, we are still waiting.

Since I’ve been spending the last year working with VR technologies, I’m particularly glad to see Google Earth for this new exciting immersive platform. They have released the program for the HTC Vive via the Steam gaming platform (the Vive was largely developed by the makers of Steam at Valve Corporation), which is the biggest platform for VR content. Considering the cost for HTC Vive ($800 – not including a beefy PC and graphics card), and it having been released less than a year ago, there are estimated to be fewer than 300,000 Vive owners at this point. Still, for Google to release now is a big statement about the future of VR. I suspect versions for Oculus Rift and Sony Playstation VR, and quite probably for Google’s new Daydream View VR platform.

Some other observations about Google Earth VR:

1) They use a “comfort mode” technique (dwhich you can turn off in the menus) which shrinks your view while you are “flying” in Google Earth. This minimizes your peripheral vision and thereby helps lower visual-induced motion sickness. It’s actually quite effective. I tried turning it off in the menu and definitely felt less comfortable when flying inside VR. Once you stop moving, you get the full 360 panorama back, and you can still swivel your view while flying.

2) If you are looking to buy the Vive, HTC is now bundling Google Earth VR with it. Which is kind of silly when you consider its a free app, so it’s not exactly a value add.

4) If you are standing in your room with your Vive (as most Vive users do), then you will notice you never are lower than about 50 meters off the ground. If you want to look closer at the ground, you can get your head closer to the ground (where you are standing) and look closer. This might not be obvious at first, so I thought I would mention it. 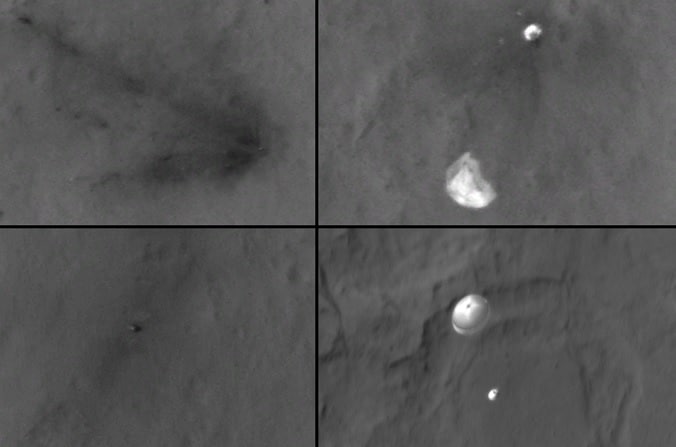 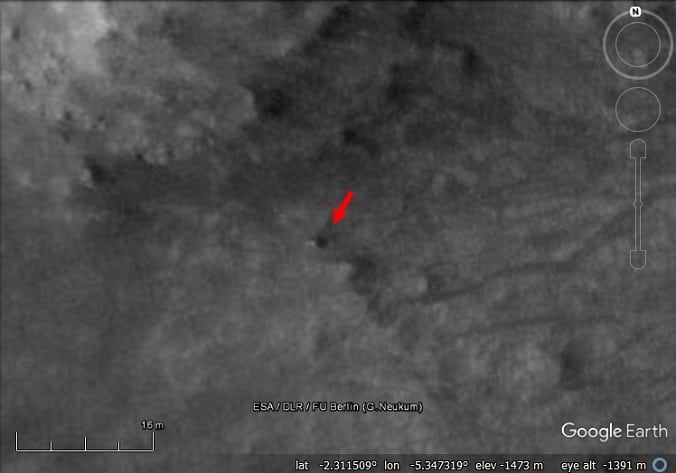 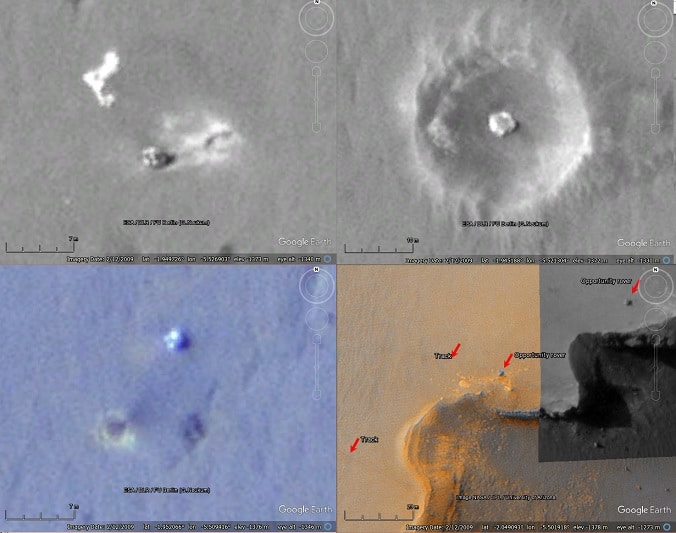 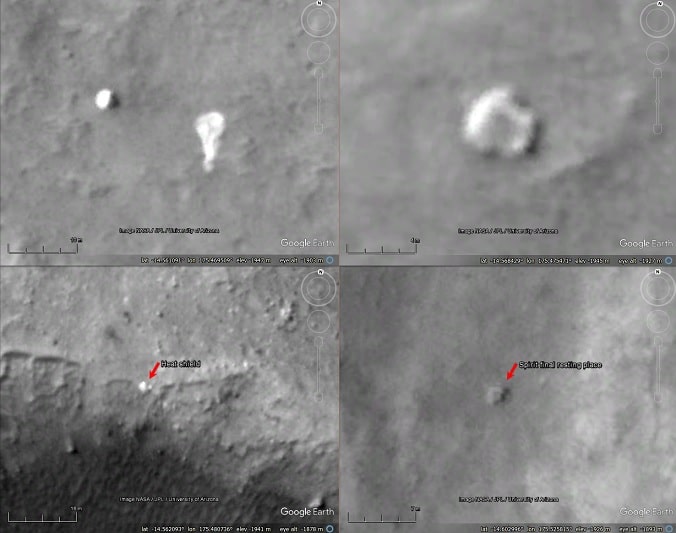 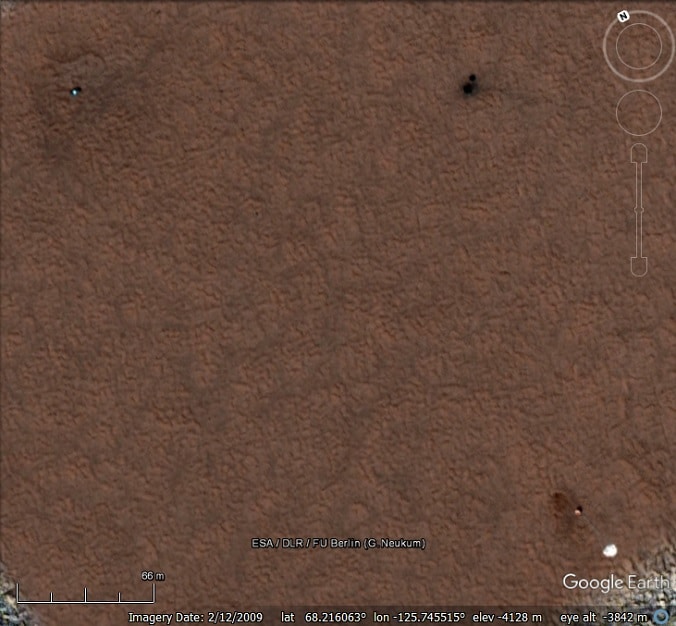 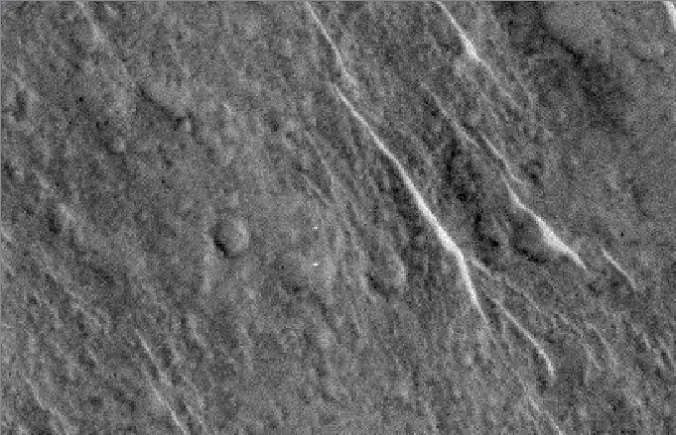