Although this blog has stopped regular blog postings, Google Earth still has a legacy of amazing stories and content. This post summarizes some of the most popular content found by our readers during the year of 2017.

The top 5 most popular posts (from any year) on Google Earth Blog during 2017:

If you notice Google Earth is taking longer to load than it used to, then the most likely cause is a large myplaces.kml file. Before proceeding with the following tip, it is highly recommended that you backup your ‘My Places’. Simply right-click on the topmost folder and select ‘Save Place As’ then select where you want to back it up to.

The first step is to go through your saved places and remove anything you no-longer need. However, if you still have a number of items that you wish to keep and loading is still slow, then one trick is to move items out of your myplaces.kml file and into separate files that are referenced via a special feature called a network link. You probably don’t need to worry about placemarks that you have personally created as they typically take up very little space in KML. The real culprits are KML files you have imported from elsewhere that have a large number of items. For example, we found that just one item, a map of world borders constituted nearly a quarter of our myplaces.kml files size. The downside of moving items to network linked files is that you can no-longer edit them directly, so look for items that you don’t intend to edit in future.

Once you have identified an item you wish to extract, right-click on it and select ‘Save Place As’. Select a place to save it to on your computer that will remain accessible and that you won’t delete by mistake. Now right-click on ‘My Places’ and select Add->Network Link. Give your network link a useful name and click ‘browse’ and select the file you saved earlier. You should now see the items you saved in the new network link folder and you can safely delete the old version of it from My Places. Repeat this for other items, or alternatively put all the items you wish to extract into a single folder and do the above procedure only once.

Using the above tactic we were able to bring our ‘myplaces.kml’ file down from 40Mb to just 5Mb and Google Earth is loading a lot faster.

Keep the network links deselected and Google Earth will not bother reading when loading.

If you are adventurous and wish to change the associations via the Windows Registry, find the following two keys:

And change thier values to the following to associate files with Google Earth Pro
"C:\Program Files (x86)\Google\Google Earth Pro\client\googleearth.exe" "%1"

Warning: Incorrectly modifying the Windows registry can have disastrous consequences. Please only try it if you are comfortable with making registry changes.

For the majority of people, however, once you have Google Earth Pro, you no-longer need Google Earth so you can simply uninstall it.

This post is a tip for people who work with KML a lot and generate KML from sources other than Google Earth. This could be programmers generating KML through code, people manually creating KML files by hand (a tedious job, but doable), or people getting KML from third party applications.

Google Earth has a setting called ‘KML Error Handling’ which decides what to do when opening a KML file with errors or features that Google Earth does not recognise. It is well worth keeping this set to ‘show prompts for all errors’ to double-check that you are producing good KML. It won’t catch all problems, but it can catch issues that you might otherwise overlook. 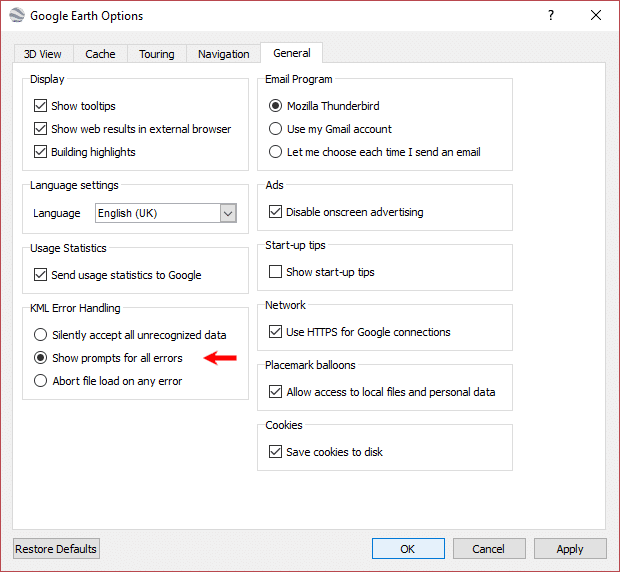 If you don’t care about KML errors then it is best to keep the setting on ‘Silently accept all unrecognised data’ as having Google Earth notify you of every error can be annoying, especially if you have an error in something in your ‘Places’, as Google Earth will warn you every time you open Google Earth. In addition, one of the built-in layers in Google Mars contains some KML errors and will pop up a message every time you switch to Google Mars.

Thank you to GEB reader Paul Moskowitz for bringing to our attention the fact that opening the flight simulator in Google Earth Pro automatically turns off the 3D buildings layer. The reason for this is that back in 2008 Google was concerned that showing 3D buildings in Flight Simulator mode would be a performance problem for some computers, so, with the release of Google Earth 4.3 they set the 3D buildings layer to be automatically disabled. At some point they reversed that decision, probably due to user complaints or the fact that computer performance has significantly increased since then, and they removed the setting from the standard version of Google Earth. However, it would appear that they forgot to do the same in Google Earth Pro. At the time, Google Earth Pro was a paid for product and thus was used only by people wanting specific features found only in Google Earth Pro. However, in January 2015, Google decided to make Google Earth Pro free and since then more and more people are using Google Earth Pro and ditching the standard version altogether. You can, however, have them both installed at the same time if you wish. 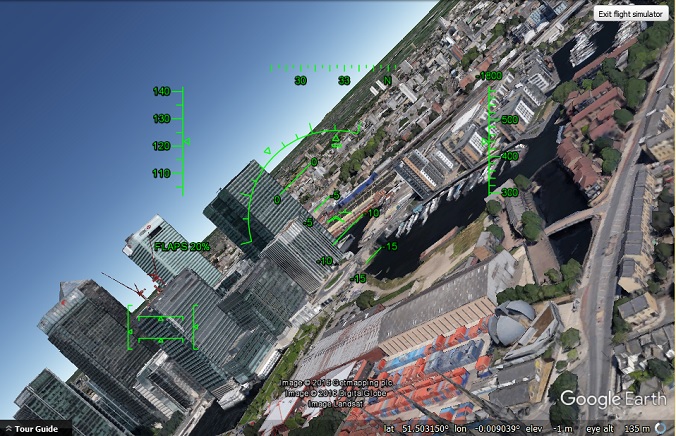