Yesterday was the first day of the special session called “Using Geobrowsers for Science” at the American Geophysical Union Fall Meeting in San Francisco. Like last year, I’m attending this conference to report on the many scientific visualizations using Google Earth to share their results. The principal organizers of this session are: John Bailey and Jon Dehn (Geophysical Institute, University of Alaska at Fairbanks), Glenn Richard (Stonybrook University), and Dina Venezky (USGS).
On Wednesday, there were eight oral presentations followed by about a dozen poster sessions held during the afternoon. Today, there will be a similar set of oral and poster sessions. Since I am presenting today, I will not be providing a detailed summary of all the sessions from yesterday just yet. A full summary will have to wait until I have more time.
For this first summary, I will highlight two interesting applications of Google Earth: 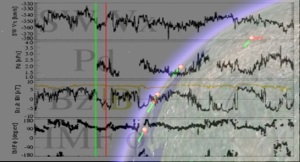 An interesting display of multiple datasets with time animations was being shown by Daiki Yoshida and Akinori Saito of Kyoto University, Japan. They have a system called DAGIK – showing daily geospace data in Google Earth using data from many sources showing solar wind, magnetometer, GOES satellite magnetic fields, and many other options. You can choose data from a calendar for specific days. Some of the data visualizations use unique 3D representations, and the time slider is used to show animations. I was particularly intrigued to see an innovative use of screen overlays to show a “progress bar” on 2D data charts overlayed on the screen while the time animations were in action. Daiki implemented this using time stamped colored gifs which were constrained to line widths and projected in their own screen overlay designed to match the underlying chart screen overlay. You can see the data and have a look at the KML of the screen overlays by visiting the DAGIK web site. You might want to watch this video first for tips on how to get it working (or just see the charts in action). 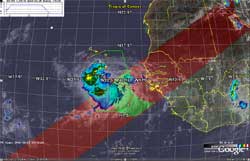 Another excellent use of Google Earth was presented during the oral sessions by Danny Hardin of the NASA Marshall Space Flight Center. The application referred to in the talk was the Real Time Mission Monitor (RTMM) which is an interactive visualization application based on Google Earth which is used in real-time to provide situational awareness and strategic decision making during field campaigns. These field campaigns involve multiple aircraft which are sent to monitor tropical storms in the Central American and Caribbean waters. They show the position and tracks of the aircraft, along with the planned routes, overlays of live radar and lightning strike data, and other information unique to each mission. By using Google Earth and network links, they are able to share this real-time data with scientists, air-flight personnel, and management at locations all over the world simultaneously during a live exercise. I was very impressed by this application of Google Earth, and hope to find out more about it. Their web site unfortunately has very few details on the GE capabilities.
My apologies that I don’t have time to summarize all of the applications of GE I saw yesterday today. But, watch for more details in the coming days.