In 2004 Google bought startup Keyhole Inc. whose main product was a virtual globe known as Keyhole Earthviewer. On June 28th, 2005, ten years ago yesterday, Google released the renamed Google Earth 3.0 for free (there were still paid versions with some extra features). Since then Google Earth has become one of the best known and most used applications in the world. Today, in honour of the 10 year anniversary of Google Earth we are looking at some of the key features and innovations that make Google Earth such a great product.

Keyhole Markup Language
Keyhole Markup Language (KML) is named for Google Earth’s predecessor Keyhole Earthviewer. It is a file format designed to make it easy to share geographic information. Google helped to make it into a standard and it is now maintained by the Open Geospatial Consortium (OGC). It remains the standard format for sharing information via Google Earth.

Panaromio
In early 2006, the above Flickr network link was temporarily not working and photo sharing site Panaromio filled the gap with their own network link. Later that year Google made the Panaromio network link into a layer. The result was that Panaromio grew quickly and in May 2007 was bought by Google. More recently, Google has been considering merging Panaromio into Google Views, but due to a petition by the Panaromio community, that plan has been put on hold.

Street View
First introduced as part of Google Maps in May 2007, Street View consists of panoramic photos like Panaromio, but systematically captured at regular intervals by driving along a street with a special camera. Street View was integrated into Google Earth 4.2 in April 2008. Street View coverage continues to expand, and in many places is recaptured at regular intervals. Find a map of current Street View coverage here. A portable Street View camera called the Trekker was developed in 2012 and has been used to capture many off-road locations. Later that year an underwater version was produced, which has since been used to capture underwater imagery in a number of locations around the globe.

Historical imagery
First introduced with version 5 in February 2009, the ‘historical imagery’ feature gives the user access to Google’s enormous archive of imagery for each location. ‘Historical imagery’ is a misnomer in that newer imagery than is found in the default layer can often be found. This extremely useful feature is unique to Google Earth and is not implemented in Google maps.

3D Buildings and other 3D models
Google Earth does not just show satellite and aerial imagery, but includes 3D terrain as well as 3D models of buildings and more. Google has tried many different techniques to try and get the whole world modelled in 3D. One early effort included buying a modelling program called SketchUp, releasing a free version of it and encouraging users to create building models. Anyone could create a model and upload it to the 3D warehouse, and if approved, it would be put into Google Earth for all to see. Google also tried another technique known as ‘Building Maker’ that allowed users to create 3D models out of 45 degree imagery. Google has also at various times purchased large sets of 3D imagery of cities and placed them in Google Earth.

Google eventually decided that the manual modelling approach was too slow and required considerable resources for quality control. In 2012 Google sold Sketchup and soon after announced a program of automatically generating 3D imagery via stereophotogrammetry from aerial imagery. A year later they stopped accepting new submissions of 3D models from the 3D warehouse and have since been rolling out 3D imagery at an ever increasing pace. Here at GEB we maintain a KML file that shows both current 3D coverage and a timeline of when the 3D was first added to Google Earth.

Sky, Mars and Moon
In 2007 Google added the Google Sky mode to Google Earth. This allows you to turn Google Earth into a basic astronomy application. Although there are probably better specialist applications out there for astronomers, Google Sky is a great way for the ordinary person to learn more about astronomy and view some great astronomical imagery in context.
In February 2009 Google Mars was released as part of Version 5. Later that year on July 9th in honor of the 40th anniversary of the Apollo 11 moon landing, Google Moon was added. The Sky, Mars and Moon modes come with a wealth of added information in the form of layers.

So far the Earth, Sky, Mars and Moon modes are the only ones available in Google Earth. However, with the appropriate imagery and a simple KML file you can easily turn the Earth into another planet or even into the Sun.

Ocean Floor
Google in general does not put satellite imagery of the oceans into Google Earth unless there is something of particular interest. Instead, a shaded relief map of the ocean floor is displayed. Initially it was just a flat image at sea level, but from Version 5 Google Earth has a 3D model of the ocean floor and you can ‘fly’ under the ocean surface and look at the underwater relief. The ocean floor map is being continually improved, with data from multiple sources being combined. There are also a number of layers dedicated to the oceans, as well as underwater Street View.

Layers and third party content
Google Earth is a lot more than just imagery and mapping information. The built in layers provide a wealth of information geographically displayed. Many of the layers are provided by third party organisations. In addition, with KML it is possible for individuals or organizations to share information which you can then save to your ‘My Places’ and have as your own personal ‘layers’ collection. Just recently Google has added a layer simply labelled ‘Coming soon’, suggesting a new layer or layers are about to be added. 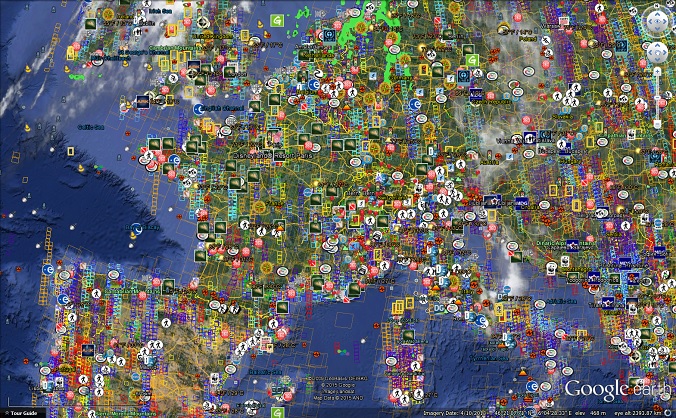 Information overload. Turning on all the layers shows just how much information is available – and this is despite a clever algorithm that limits the number of icons shown by each layer.

Flight Simulator
In September 2006 Google Earth introduced ‘G-Force Mode’, which allowed a user with a joystick or other controller to navigate around Google Earth in similar fashion to a flight simulator. The next year, in August 2007, a proper ‘flight simulator mode’ was introduced. Since then, various third parties have implemented improvements or completed replacements to give a much more sophisticated flight simulator experience. The best of these is probably GEFS Online, which is based on the Google Earth plugin.

Liquid Galaxy
In 2008, Google showcased a setup with 8 screens set up in a 360 degree booth all showing Google Earth in a synchronised fashion to give an immersive experience. They have since published instructions for building a similar set-up and anyone can create their own with multiple computers and screens.

Google Earth API/plugin
In 2006 Google provided an Application Program Interface (API) based on Microsoft’s Component Object Model (COM) technology, which allowed programmers to control Google Earth from another program. On Mac OS X there was also an undocumented API for AppleScript. Later, Google release the Google Earth browser plugin, which has a JavaScript API. It also provided sample code to show how to use it, including the very popular Monster Milktruck driving simulator. However, the Google Earth plugin is based on NPAPI, which is now ageing technology and considered a security risk. As a result, browsers are dropping support for it and Google has deprecated the Google Earth API.

Google has not made the size of the Google Earth database public. In 2006 we estimated it to be over 150 terabytes. The quantity of imagery has increased dramatically since then, so will be in the petabytes by now. And that is not including Street View imagery and the need to replicate over many servers to provide good performance.

Over the years, we’ve shown you a variety of great ways to use Google Earth to track hurricanes. While much of that data comes from weather satellites, some of it comes from “hurricane hunters” that fly into the storms to pick up detailed conditions that can be used to help predict the path of the storm.
Morgan Palmer has written an excellent blog post to show you how to track the planes that are collecting data from these storms. Tropical Storm Debby is currently drenching the gulf coast of the US and the planes have already made a number of trips into the storm. 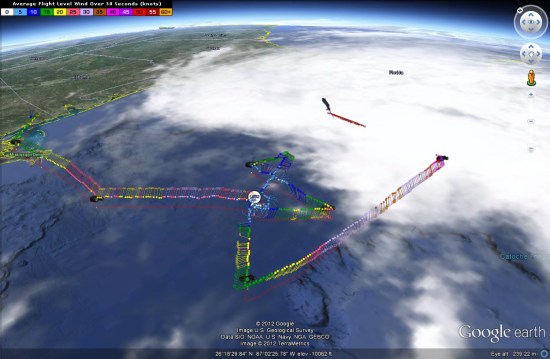 To get started quickly, simply visit the Live Recon page on TropicalAtlantic.com and click the “Live Recon Data in Google Earth” link. That will load a KMZ file onto your computer, from which you can view the current and recent data. To make the experience even better, enable parts of the [Weather] layer (particularly the clouds) so you can get a more detailed look at what they’re flying into.
For details on how to use the file, be sure to check out the full post on Morgan’s site.

The Rolex Sydney Hobart Yacht race, now in its 66th year, is underway off the coast of Australia. The 628 nautical mile race, in which racers travel from from Sydney Harbor to the historical port city of Hobart, is a very popular event in Australia. Event organizers have provided Google Earth tracking of the race for a few years now, and it’s a great way to follow the race. 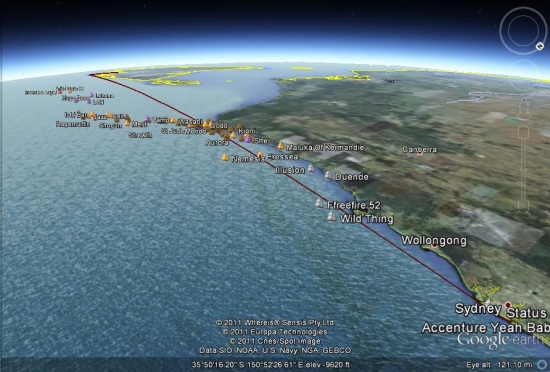 Along with the course line and locations of each boat, as seen above, you can click on any of the boat icons for more information; details on the boat, a photo, description, precise location, etc. It’s quite a comprehensive file. The file is built as a network link, so it automatically updates itself with new information every 10 minutes. 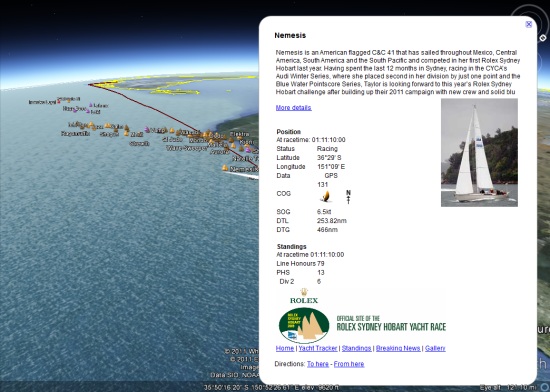 To get the KML file for the race, simply visit this page on their site. Along with instructions, they also have a couple of KML files available to download. One is the main racing KML

, the other is a CSIRO file

that shows sea surface temperature and current directions, which is a great supplement to the main file. Head over there and follow the race right now!

A few years ago, Frank collected a variety of weather-related tools for Google Earth and put them into a nice package. Since then, a few of those tools have disappeared and a few new ones have been added, so I’ve rebuilt the collection with those changes made. 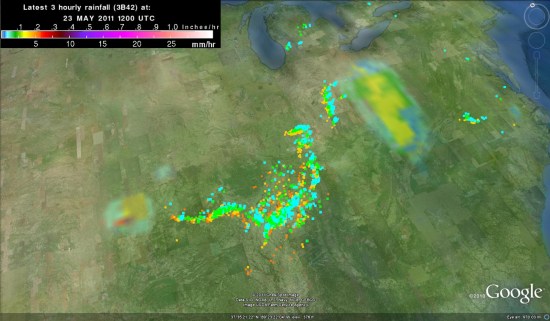 Two of the big contributors to the old file were GUIweather and WeatherBonk, and both sites are now completely gone. They both provided some excellent data, so it’s quite a shame that they’re gone. However, we’ve now added data from the World-Wide Lightning Location Network and NASA Goddard’s TRMM Project.
If you already have a copy of the old network link, it should automatically refresh with the new information. Either way, you can download the KMZ file here.

If you have other valuable data that you think should be included, please leave a comment and include a link to their KML/KMZ data that we can include. Thanks!

We’ve talked about the Carolina Bays before, but today we’ve got a great new way to view them. Michael at Cintos Research sent over some information about their new use of LiDAR DEM hsv-shaded imagery to expose as many of the Bays as they could — over 22,000 so far! 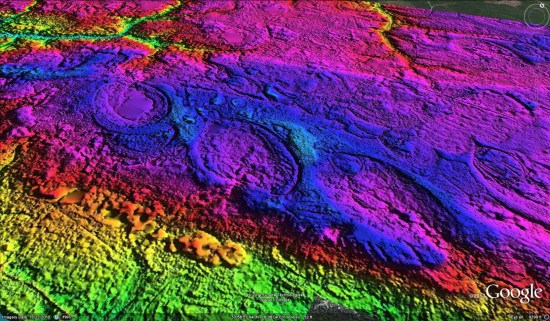 If you want to just see one quickly, here’s a KMZ file to download.

To see the rest of them, you can pull individual KMZ files from this Google Fusion Table that they’ve put together.
To take it even further, their data includes placemarks for each of the 22,000 bays, with transparent png overlays to show the exact location of each Bay. Turning the overlays on and off help to reveal the bay in the standard Google Earth imagery. 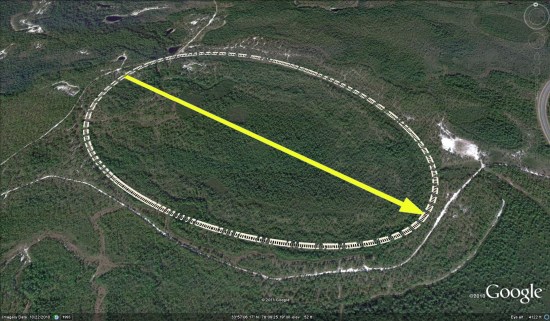 For more about this project, check out the entry at IdeaScale.com.