Yesterday Google released a new version of Google Earth Pro (for the Desktop version of Google Earth – not mobile) version 7.3.2. I’ve copied the highlights from their announcement post at the Google Earth and Maps forum down below. The new version addresses a number of issues with different platforms and features, but the most significant news is that Google has finally addressed a long-needed feature for manipulating places content in the sidebar. This has probably been the most frequently wanted feature by power users of Google Earth since it was first released. Yes, Google has finally implemented the ability to multi-select places content and drag and drop to different folders, or delete a multi-selected area. See screenshot of dragging and dropping items from one folder to another below: 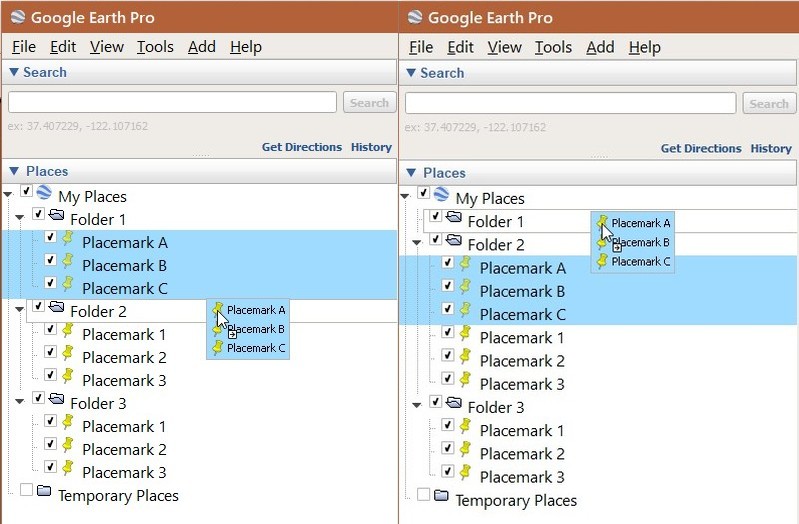 You can get the new version now by going to the Google Earth Pro for Desktop download page. Google will be automatically updating users who already have Google Earth Pro installed (if you allowed that during your installation).

It is good to see Google continuing to support Google Earth Pro on the desktop. Especially since the desktop version has far more features and performance capabilities verses the new web and mobile versions which has most of Google’s development focus these days.

Here are highlights of the fixes, changes and improvements we’ve made for this release of Google Earth Pro.

The announcement post also includes some notes that 32-bit versions of Google Earth will be automatically updated to 64-bit unless you specifically download the version you want on the provided link.

Last night Google released a new version of the desktop version of Google Earth Pro version 7.3.1 (which is free despite the confusing “Pro” name). You can download this at the download page found here: www.google.com/earth/desktop/

This new version 7.3.1 represents some significant work by Google to add “bug fixes, performance and feature improvements, and security upgrades.” – as seen in the announcement post in the Google Earth help forum here.

I am showing the full release notes below, but I want  to explain some things about this version to those of you who might be confused about the different versions of Google Earth out there:

There are two distinct versions of Google Earth currently: Google Earth Pro (for desktop OSes: Windows 7+, Mac OS 10.8+, and Linux) and Google Earth  for Chrome and Mobile (web-based and Android/IOS). The web/mobile version is a new partial re-write of the original Google Earth software, but is much more limited in many ways – in particular because you can’t create content with it for placing on the Earth (read review of its release last April). The desktop version, Google Earth Pro, on the other hand has all the features for creating content derived from the last 13+ years of development on Google Earth, and provides you with a wealth of built-in layers and content, as well as many ways to view content (as documented on this blog since 2005). Eventually, Google says they plan to incorporate more features in the web/mobile version. But, until then, they plan to continue to support the more powerful desktop version of Google Earth Pro. [UPDATE: I should have said “three distinct versions“, because there is also Google Earth VR. But, only a small segment of population have access to high-end VR devices which can run it (Rift, Vive, and the new Windows VR devices).]

Since the web/mobile version is a long way from replacing the desktop version, it is important to thank Google for continuing to support Google Earth Pro. This new version 7.3.1 incorporates a wide range of bug fixes, security and performance enhancements, and even some new features (a condensed list is in the release notes below) for all operating systems supported. The actual fixes are too numerous (and for most too boring) to list, but Google has been listening to feedback on the help forum and fixing those which have the greatest impact. My favorite change happens to be the fix which supports higher refresh displays which run faster than 120Hz. Also, of particular note is support for Windows 64-bit version.

Here are a few highlights of the many fixes, changes and improvements we’ve made for this release of Google Earth Pro.

Although this blog has stopped regular blog postings, Google Earth still has a legacy of amazing stories and content. This post summarizes some of the most popular content found by our readers during the year of 2017.

The top 5 most popular posts (from any year) on Google Earth Blog during 2017: 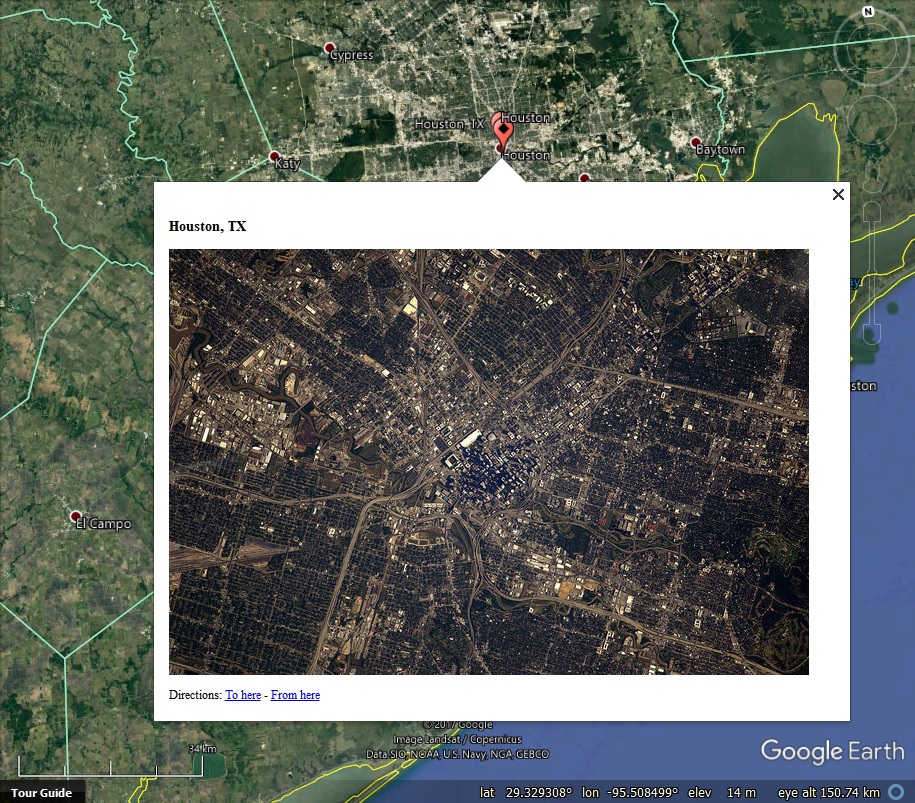 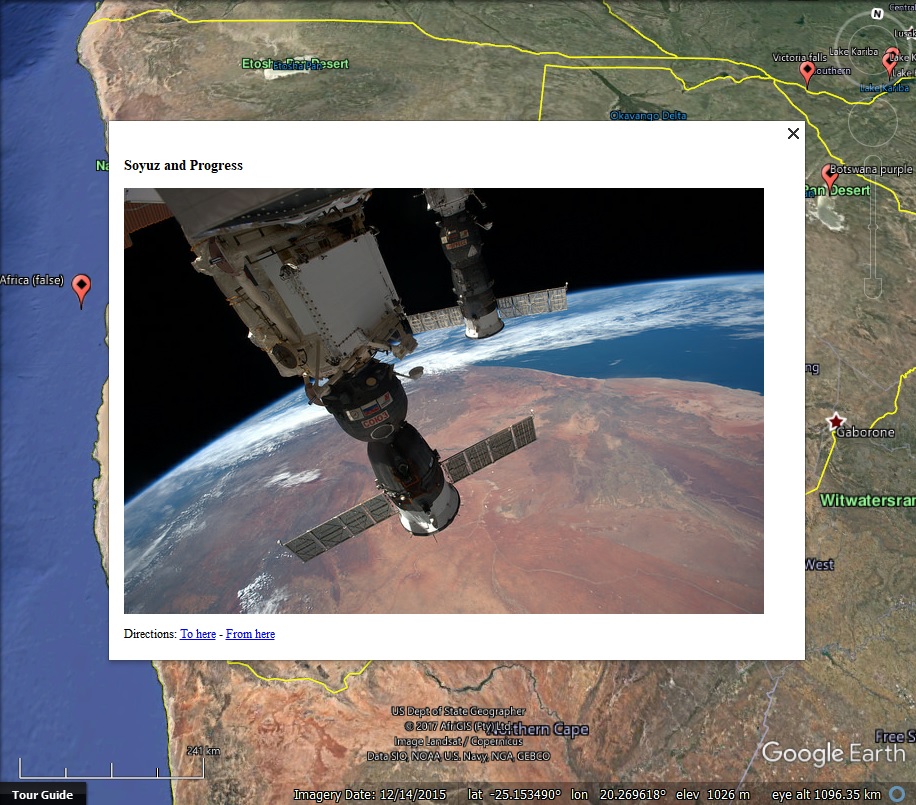 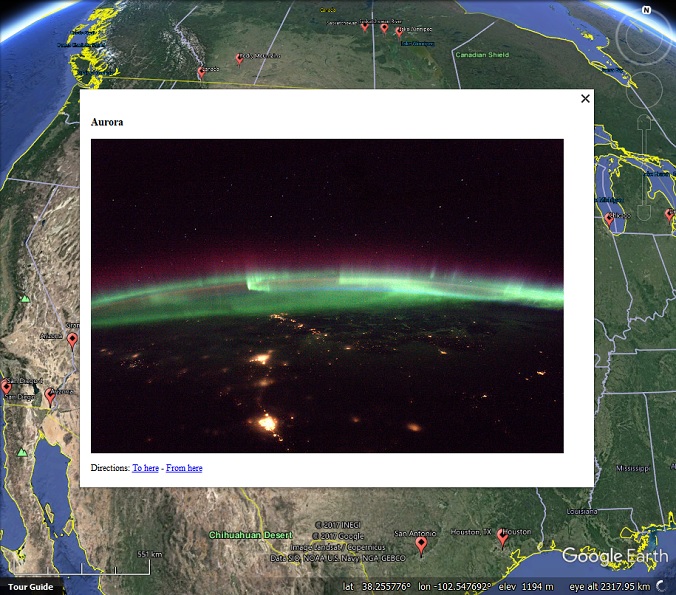