My name is Frank Taylor, and I am the founder and publisher of Google Earth Blog. I also recently completed an expedition to sail around the world. One of the many reasons I was immediately attracted to Google Earth in 2005 was that my wife Karen and I had for many years planned to circumnavigate the real Earth by sailboat. Google Earth provided a fantastic way to explore the places we planned to visit. We finally departed in 2009, and we have just completed (on June 11, 2015) our journey after sailing for over 5 years, more than 44,000 nautical miles, and visiting more than 30 countries. We used Google Earth to help share our experiences, and plan further explorations. 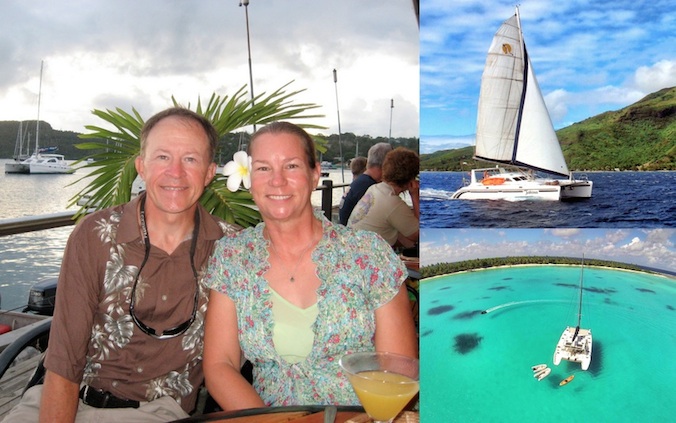 We spent years preparing for the trip, and in 2008 bought a beautiful catamaran we named Tahina, sold our house and cars and many other belongings, got our kids started in universities, and prepared to depart in November 2009. You can see the route of our circumnavigation in the screenshot of a map below. If you click this link, you can use Google Earth to zoom in to parts of the route in the Atlantic and Pacific and it will load detailed GPS tracks and maps of significant places, and geo-tagged photos of the places we visited (zoom in to New Zealand for example). You can also see many of the 360 panoramas I photographed along the way (a sort of mini-Street View of exotic places). The detailed maps have so far only been completed through the Pacific to New Caledonia, but I will update the rest later. 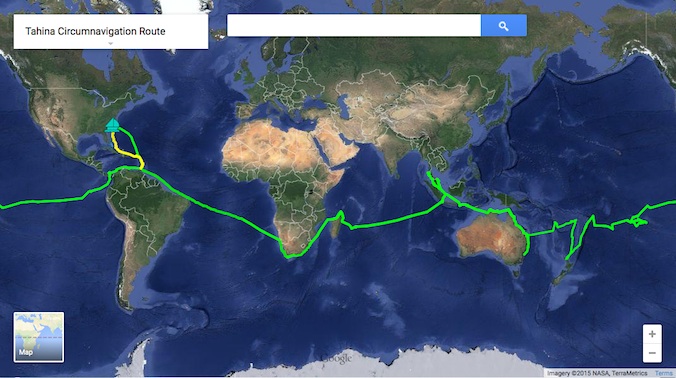 We thoroughly documented our adventures, with our TahinaExpedition.com web site and blog. We took nearly 100,000 photos and videos along the way, the best of which were shared on our site, Panoramio and Google Earth, and Google Picasa Web Albums. Google Earth and Maps were used extensively to map and show the places we visited including GPS tracks of our passages over water, and sometimes our trips on land. And the locations where our photographs were taken were mapped as well. We even used Google Earth on numerous occasions to help guide us to some of the more dangerous approaches to passes and bays where we visited. The satellite and aerial imagery of these locations proved invaluable to improving our situational awareness to both the land, the waters, and other hazards (sunken ships, reefs, and more) of the areas. [Read tips for sailors using Google Earth]

I have to thank many businesses who partnered with us to help share our experiences using many devices along the way. In particular, I want to give special thanks to Google who was very supportive in my crazy schemes to use Google Earth to share the places we visited. For example, I would sometimes fly a kite with a special camera rig (this was before drones became popular) to capture aerial photography of unique places and then Google would process and include the imagery in Google Earth (see example). The 360 photography I took sometimes involved setting up with a tripod on the edges of cliffs or buildings while turning around in circles to capture full spherical imagery. We also took video with an underwater remote operated vehicle (ROV – or drone in today’s terminology) of many places we visited (the ROV was made by our partner VideoRay). 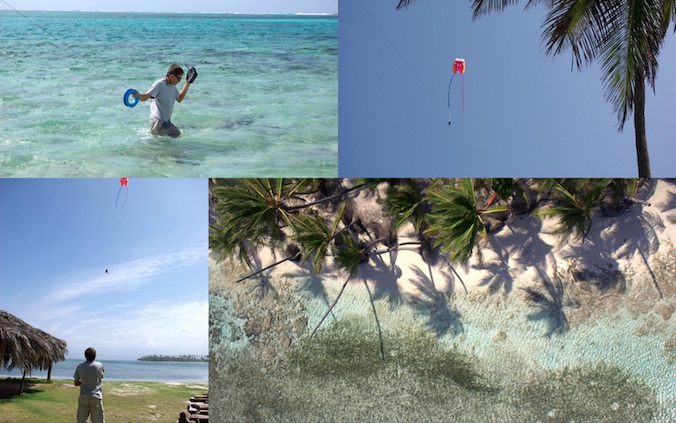 We tried to raise awareness of many issues we saw facing our oceans and the marine life we witnessed along the way. Everything from trash in the oceans, overfishing, and many dying coral reefs were experienced by us on numerous occasions throughout our travels. We are greatly worried that our own children will find environmental devastation if they visit these same places in just a few years from now, or even worse when our grandchildren attempt it.

We stayed in contact with family and friends, and shared our experiences through a variety of means – primarily the Internet of course. On long passages we had both long-range radio communications (which we could use E-mail to get weather and share position reports over the Internet), and we also could use onboard satellite communications to do more Internet when needed (although quite expensive). When near land, we could sometimes get SIM cards for unlocked phones and use shore-based cell service for Internet. Other times we could find WIFI to use from our boat, other times we would have to find hotels or restaurants with WIFI service. In some locations there was no Internet, or even people, to be found at all.

Although our boat was far from home for many years, we would sometimes fly home to visit with family and friends back in the United States, usually once a year. And some friends and family would fly out to join us for a few days or weeks along the way. Even so, we missed many events in the lives of our friends and families, and sadly even the loss of a few. But, our lives were forever enriched by the the amazing experiences we had on this trip of a lifetime. We saw so many places, met so many wonderful people from the countries we visited, and shared our travels with many new and old friends along the way. There are a vast number of stories told of some of the more exciting or even terrifying moments on the Tahina site. We hope you’ll spend some time and explore our experiences some day.

Although our trip is now over, we plan to still share a few of the continuing experiences as we try to figure out what we are going to do next with our lives. We have a lot of reconnecting to do, and a lot of work unloading our boat and reorganizing our lives again. And, of course, I plan to update our maps with even more details of the entire trip and share them with Google Earth in the coming months. But, the real question we are asking ourselves is what will we do next? The answer to that question right now is that we will decide that when the time is right. Right now, we’re just going to enjoy being back home and we’ll decide when its time to pull the anchor up and move on to our next destination.

Google Earth can be great for planning trips of any kind, including those by boat. More than seven years ago Frank was showing us 3D cruise ship tracking, and there have been other great cruising resources over the years. Of course, there is also the great tools that Frank is using as he sails around the world aboard the Tahina.

Doug Logan recently wrote an article on Boat Trader that shows some great ways to use Google Earth to help plan your next trip. As Doug says:

…it’s hard to beat sitting at my desk with a big monitor, loading up Google Earth, and plotting a complete cruise with the best satellite imagery in the civilian world and really simple, intuitive screen tools. For free. 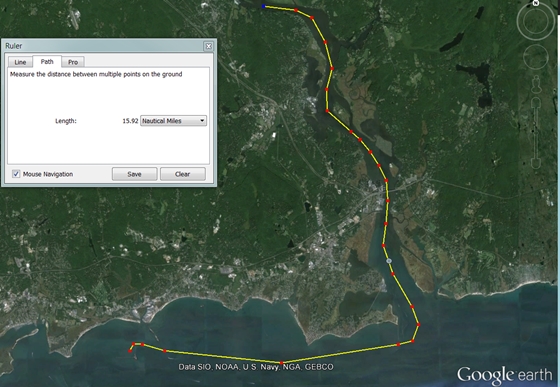 The techniques that Doug uses aren’t overly complex or unique, but they’re a solid example of how you can use the native tools in Google Earth to help plan what you need to do.

Be sure to check out this full article on Boat Trader. Good work Doug!

For years, “Sandy Island” has shown up in various maps and marine charts, including Google Earth and Google Maps. Scientists were confused, because their records showed a water depth of 1400m at that location, so they went to check it out. As they suspected, the island doesn’t exist.
There’s no telling how the island first appeared on maps, but it’s apparently been on scientific maps (and subsequently Google Earth) for many years. Here’s how the island currently appears in Google Earth: 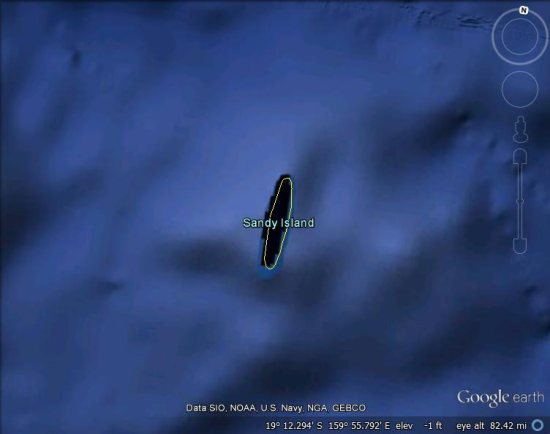 It will likely be fixed in Google Earth very soon, but in the meantime you can view it by using
this KML file.

For more, check out the full story on the BBC website.

Released as part of Google Earth 5 back in 2009, the 3D Ocean is an amazing feature. Being able to fly below the waves and see the ocean floor with true 3D bathymetry is quite remarkable.

Google has also added the ability for users to create and load 3D models in the ocean. There aren’t many of them under there, but there are a few amazing models to see — such as the Titanic. 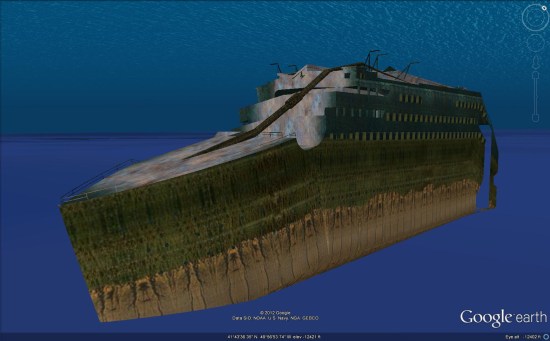 Last week, of course, we saw the brilliant new underwater “street view” imagery from Google. It’s still not available in Google Earth, and we don’t know why, but we expect it will be soon. It’s an incredible way to view the sea, and hopefully it will come to Google Earth soon.