Google has pushed out new imagery at least four times this month. 1, 2, 3, and a very recent update that we haven’t covered yet!

We found quite a lot of interesting sights in Google Earth imagery this month, including: 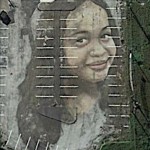 * Nyssa, a very large painting by Jorge Rodriguez-Gerada.
* Super Bowl celebrations in Denver Colorado.
* Mississippi flooding.
* A collapsed building due to an earthquake in Taiwan.
* A train crash in Germany.
* Flooding in India, Tanzania and Brazil.
* Demolished buildings in Zaria, Nigeria, indicating a possible cover up of mass killings. 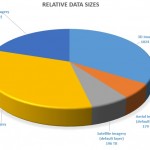 We did a series of posts attempting to estimate the size of the Google Earth database and how much space the different types of imagery require. First we looked at 3D imagery, then different types of 2D imagery, moved on to historical imagery and finally put it all together and came up with a very rough estimate of 3 Petabytes! 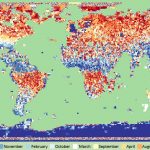 We created a map showing the most popular times of year for capturing imagery in different parts of the world. The resulting pattern was very interesting. In the extreme latitudes, there is a lot less imagery captured in the winter because of snow cover and, as GEB reader Chris pointed out, the shorter days and longer shadow make gathering good quality imagery more difficult. In the lower latitudes the situation is reversed, with more imagery gathered in the winter, most likely because there is typically more cloud cover in the summer months. 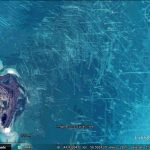 We had a look at some scratch marks on the floor of the Caspian Sea and compared the view from Landsat imagery and ASTER imagery. We forgot to mention that the area also has DigitalGlobe imagery from 2005, which also shows scratch marks. 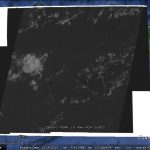 We had a look at the Sentinel missions and hope to cover them more in later posts when we have learned how to process the imagery. Thank you to GEB reader ‘mzuehlkeMarco’ for pointing us to a tool called SNAP for processing the imagery. 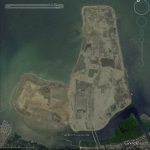 We had a look at some examples of land reclamation that can be seen taking place in Google Earth imagery. 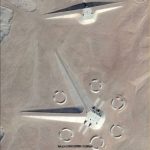 We had a look at some strange buildings in the desert and decided they are Surface to Air Missile (SAM) sites, which it turns out are remarkably common and easy to identify in imagery once you know what to look for. 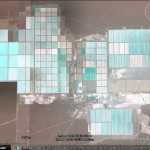 At the end of March, Tesla unveiled the Tesla Model 3 and we had a look at Lithium mines around the world, which may supply the necessary Lithium for the Tesla cars.