Yesterday we had a look at some of the interesting imagery of the United States from the latest Google Earth imagery update. Today we are having a look around the rest of the world to see what we can find. Most of the locations were found with the assistance of DigitalGlobe’s ‘first look’ map.

On February 6, 2016, an earthquake of magnitude 6.4 struck the south-west of Taiwan causing widespread damage and 117 deaths. Most of the deaths were caused by the collapse of a 17 floor apartment block in Tainan. Read more about it and see drone footage in this article. One possible cause of the collapse is poor construction, including, believe it or not, the use of cooking oil cans as a building material. 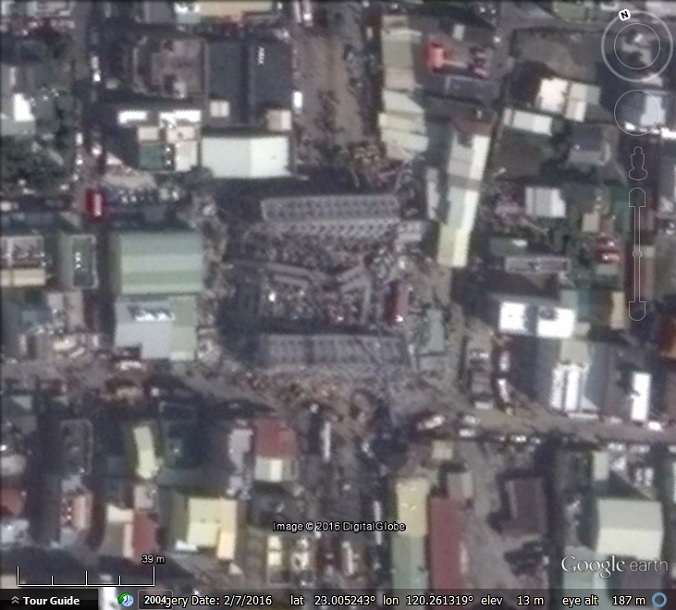 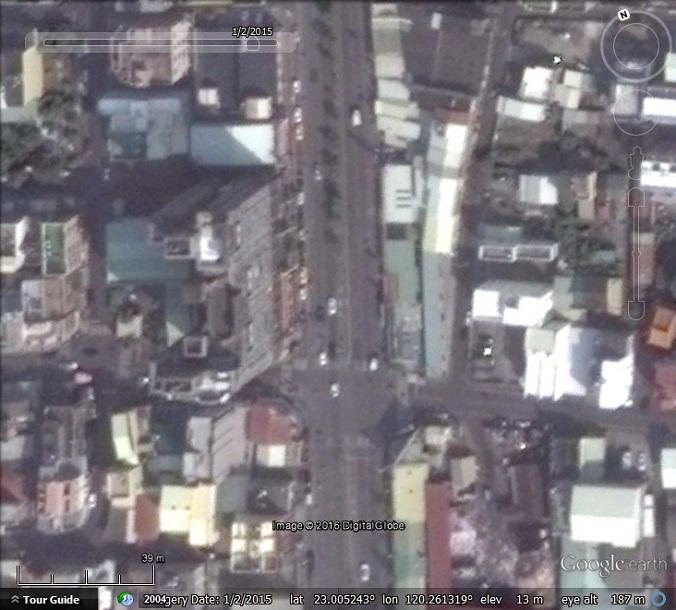 Before and after: collapsed apartment block in Tainan, Taiwan.

On 9 February 2016 there was a head on collision between two trains near the town of Bad Aibling, Germany. The photo below was captured three days later. Based on the Wikipedia page, it would appear that both trains involved were blue and the emergency engineering train for carrying out repairs is red, so what we can see on the tracks may be one or more emergency engineering trains. The crash may have been caused by a controller making an error because he was distracted by a game he was playing on his phone. 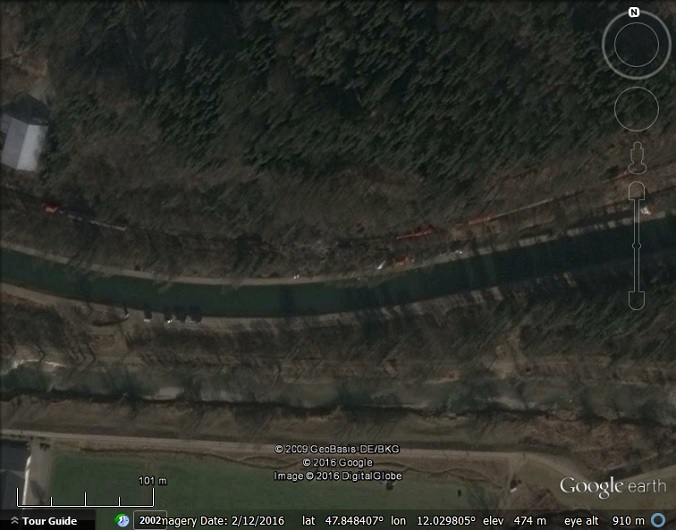 In December, 2015, we showed you some imagery of flooding in southern India via the Google Crisis response page. Now, that imagery and more has made its way into Google Earth. Read more about the floods on Wikipedia. 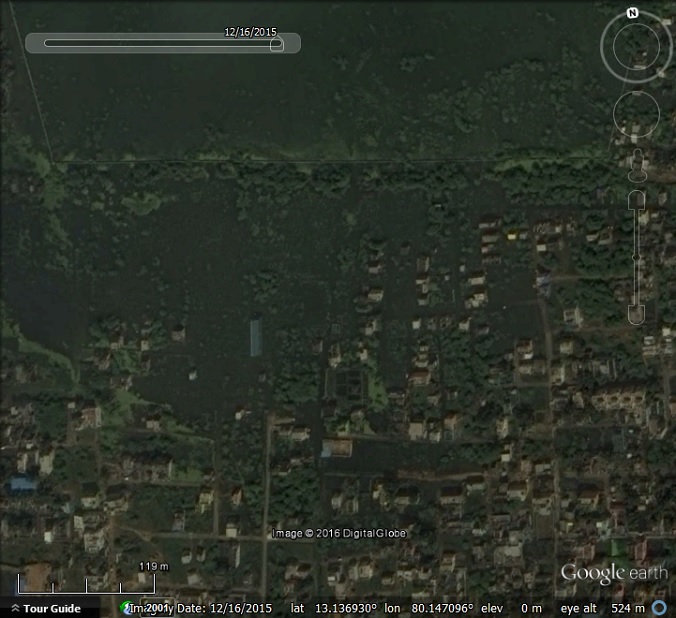 Flooding in Chennai, India. The area has a lot of swamps and lakes so be sure to compare with historical imagery before concluding that a body of water is part of the flood.

January saw heavy flooding in Tanzania and there is some related imagery in Google Earth. We didn’t find any serious flooding in built up areas, but we did find these flooded fields: 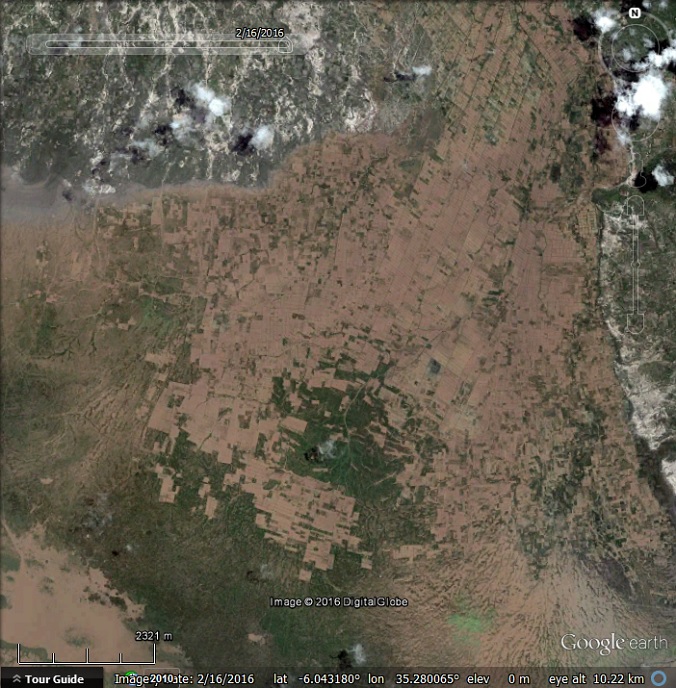 It is a river delta onto Lake Sulunga, so its flooding may be a common event.

We also came across Benjamin Constant, Brazil. At first sight it looks like a disastrous flood, but closer inspection reveals raised walkways between the houses, indicating that flooding is common and preparations have been made. A look through the historical imagery also shows that the flood waters are not higher than previous events. 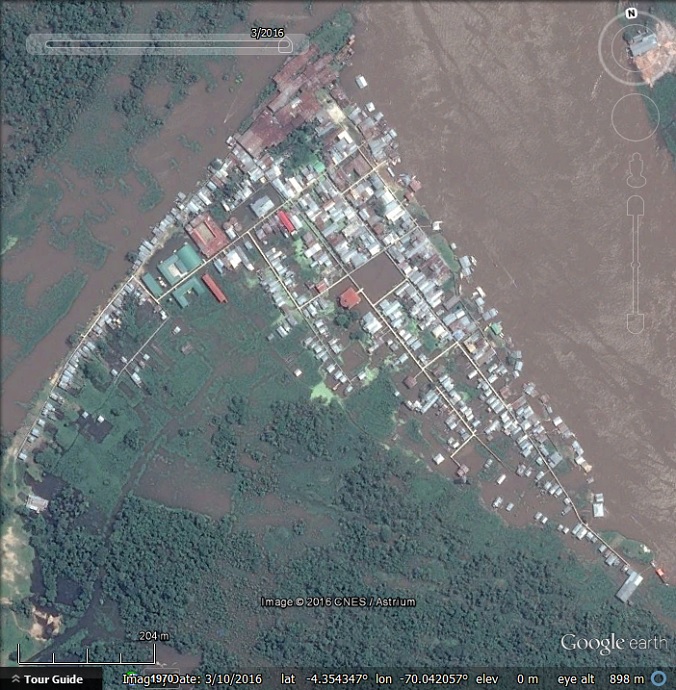 . We have also included some other locations where imagery has clearly been captured for a specific event, but we were unable to find anything related to the event in the imagery.