The US Geological Survey (USGS) has released a press advisory in advance of a video conference to be broadcast live 06-April-2006 at 10:00 AM PDT. The advisory says they will be demoing a “Virtual Tour of the 1906 earthquake” which will be released to allow the “public an opportunity to interactively view both historic information and up-to-the-minute science and hazard information on the most damaging earthquake in U.S. history”. This was done for the 1906 Earthquake Centennial Alliance (the anniversary is April 18 according to the Wikipedia story on the quake). A link to the video is provided in the advisory and a link to the future archived copy of it is provided as well.
Thanks to Gary at Ask.com for e-mailing me about this.

One issue with the current version of Google Earth is you can’t show subsurface information. GE doesn’t let you show data below its 3D rendered surface. So, for example, showing underground geological features, or wells for example. Valery Hronusov from Russia’s Academy of Science in Perm, Russia has come up with an interesting innovation. He has used his KMLer application to convert a GIS dataset showing an oil repository

and related information. His innovation is to show the sub-surface data above the site where it is located underground. Valery is a very innovative guy with lots of interesting data at his fingertips. You can see other interesting works by Valery: NASA data here, here and here; tracking birds; and other GIS data.

On 27-March-2006 NASA released some new photos of Jupiter from the Cassini mission. Included is a cylindrical map of the entire atmosphere of Jupiter. I’ve created an image overlay for Google Earth so you can view the picture as a 3D globe instead of a boring flat map. Turn off any extra layers or placemarks first. Also, make sure you turn off “Atmosphere” in “Tools->Options” so you don’t see the Earth’s atmosphere around Jupiter (that looks a little weird). Then, go ahead and load Jupiter

.
By the way, there is a great free program for viewing space-related sites called Celestia. I’m sure it won’t be long before someone takes this new photo and makes it available to Celestia as well (although that program already has an excellent photomap of Jupiter).
Related: Check out this new Jupiter – Clouds in Motion story.

which will automatically reflect his weekly updates. The underlying data is now based on ESRI’s ArcGIS software, and converted for Google Earth using Arc2Earth. For reference, Declan has provided an excellent (and quite colorful) poultry density map for the world to show the relation of cases reported to the population of poultry. And finally, you can visit the web page he has created which provides the link to the network link and also provides background information on the data. This new version replaces the version previously reported.
One thing the new data makes apparent is that the avian flu continues to spread. If you open the folders you can turn on the placemarks for each year since the flu was first reported. Someday Google Earth will have a feature allowing you to automatically reflect the time spread of data. For now, you’ll have to click the folders for each year on and off. The new Avian Flu tracker lets you easily distinguish between bird and human cases as well. This is an excellent example of using GIS data and visualizing it with GE. The authors of Arc2Earth have recently released a new walkthrough guide on how to convert GIS data for use with GE. 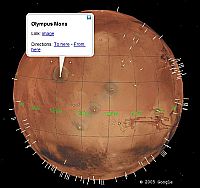 Since there is a lot of interest in Mars at the moment, we should turn to the many innovative users of Google Earth for help. So, let’s look at Mars in Google Earth right now!
Last summer, someone called ‘rottenapple’ at the Google Earth Community (GEC) announced a Mars overlay with placemarks for Google Earth. You can load his Mars map with labels (v1.1)

(4.5 Mbytes) and look at Mars now. Included is a high-resolution satellite photo of the entire surface of mars. In addition, are many placemarks showing the significant landmarks on Mars. Note: you should turn off “View->Atmosphere” to get the best effect.
When Google re-releases their Mars database for Google Earth (see this) it will have even more data. Instead, you will have a 3D terrain model of Mars (just like we have now for the Earth). And, there will be layers for the various types of information available about Mars. Also, I presume users will add their own placemarks to make viewing it even more informative. With Mars coming soon, it can’t be long before Google releases the Moon in 3D for GE.
Also, check out the new Google Maps version of Mars.
Here are other planets available in Google Earth (updated 2007):