Google is the sponsor of $30 Million in prizes, the biggest part of which is to be given to the first private venture to send a robotic mission to the moon and also transmit a video “mooncast” back Earth – or at least the Internet. The prize will be the Google Lunar X PRIZE (I like how they call it “Moon 2.0”) and is being run by the X PRIZE Foundation. The prize was announced today at the Wired Nextfest in Los Angeles, California. Also, check out the new Google page about it. Here is a short excerpt from the announcement made by Google and the X PRIZE Foundation (with Bob Weiss, Peter Diamandis, Larry Page, and Astronaut Buzz Aldrin):

Here is an excerpt from the press release:

…Private companies from around the world will compete to land a privately funded robotic rover on the Moon that is capable of completing several mission objectives, including roaming the lunar surface for at least 500 meters and sending video, images and data back to the Earth. The Google Lunar X PRIZE is an unprecedented international competition that will challenge and inspire engineers and entrepreneurs from around the world to develop low-cost methods of robotic space exploration. The X PRIZE Foundation, best known for the $10 million Ansari X PRIZE for private suborbital spaceflight, is an educational nonprofit prize organization whose goal is to bring about radical breakthroughs to solve some of the greatest challenges facing the world today.

“The Google Lunar X PRIZE calls on entrepreneurs, engineers and visionaries from around the world to return us to the lunar surface and explore this environment for the benefit of all humanity,” said Dr. Peter H. Diamandis, Chairman and CEO of the X PRIZE Foundation. “We are confident that teams from around the world will help develop new robotic and virtual presence technology, which will dramatically reduce the cost of space exploration.”

A little background here: The X PRIZE Foundation, which was founded by my long-time friend Peter Diamandis (Peter and I started SEDS together in our college days), was created to help stimulate interest in space travel. It was modeled on the concept started by the Orteig prize which stimulated aviation when the Spirit of St. Louis flown by Charles Lindberg crossed the Atlantic to win the prize. The first Ansari X PRIZE was the one which prompted Burt Rutan to build Space Ship One and win that $10 Million dollar prize to privately launch a man into space. This new prize is doubly-exciting because it involves not only a bigger prize and a very interesting objective, but also because Google is the sponsor!
Google Earth Angle 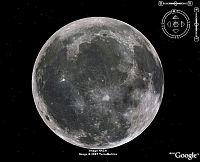 Now maybe Google will produce a new version of Google Earth to show the moon. You can get a taste of what it might be like from this moon image overlay

which will turn Google Earth into the moon. This is not a high resolution image, it’s only suitable for viewing at a distance. Deselect the “View->Atmosphere” menu item (since the moon has no atmosphere). You can add some interesting lunar placemarks

that a Google Earth Community member named ‘Withaar’ posted to go with a moon overlay like this (load both files).
Maybe Google will create a real Google Moon (I mean in the 3D sense like Google Earth) now that there’s going to be greater interest in going there? Maybe we’ll be able to control our own lunar robot rovers from Google Moon someday? Meanwhile, check out the 2D Google Moon here.
Make sure to visit the Google Lunar X PRIZE web site for all kinds of other details. Things like a store, educational videos, and interesting background information for why they are doing this. I especially like this video showing the relative scale of the Earth and Moon.