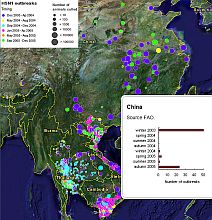 A few months ago Declan Butler, a Senior Reporter for Nature Magazine, began publishing work he was doing to provide data on the Avian Flu outbreak using Google Earth. Declan has continued to work on the data, and recently announced an update on his blog. The update

includes a greatly improved look and even more recent data on the outbreak of avian flu. As you would expect from a Senior Reporter of a scientific magazine, Declan includes details on the data, how he compiled the data, and issues with presenting the data within the Google Earth file. He also provides details on how he implemented the Google Earth KML, and credits suggestions given to him which helped him improve the data presented.
[EDIT 1245pm EST: The article which…

[EDIT 1245pm EST: The article which mentions the Avian flu outbreak map as well as the GE file is published now (subscription required) at the online Nature Magazine. Declan Butler was nice enough to forward me a copy of the article. The article however is not an article on the flu or the flu map, but an article about how mashups can mix databases from a variety of sources and viewed easily by wide audiences. Hopefully Declan will write a future story specifcally about his Google Earth/Avian Flu project.]
Stefan Geens at OgleEarth wrote about this today and he points out some of the issues Declan (and others) encountered in the GE user interface presented by large datasets like this. In particular, Stefan mentioned the need for a time-based animation feature in GE and points out that Google’s Michael Jones recently demonstrated an in-house capabiility to do exactly that type of feature (so, we can only hope that feature will be availiable in a future release). Being able to show the spread of the flu over time with an animation would be quite powerful.