The USGS has put together a Google Earth presentation allowing you to easily take a virtual helicopter ride along the Hayward Fault. The Hayward Fault is a geological formation, less well known than the San Andreas Fault, located in the range parallelling the southeast side of San Francisco Bay, California. The USGS team was looking for a way “to provide data to the public in a way that’s interesting” said Luke Blair, geographical information manager for the USGS earthquake hazard team. “We’re very excited about this.” The Hayward Fault Google Earth file

contains the path of the Hayward Fault with annotations highlighting the critical areas of the fault. It also has photos showing pictures of streets and buildings that are effected already by the average one-fifth of an inch creep north each year. Pictures of curbs that don’t match, cracks in streets, etc. Once you open the GE file, click on the “Hayward Fault Virtual Helicopter Tour” placemark (open the folders), and then select “View->Play Tour” or hit F10 to fly along the fault. Click on the camera icons to see the photos.
The fault line goes through many dense residential areas, and right through the middle of a football stadium (shown occupied in the aerial photo shown in Google Earth). I’m not sure I would be happy about this presentation from a real estate point of view if I owned property there. But, its certainly of benefit to those looking to buy. The geologists were quoted in the news stories (see below) that the fault is “cocked and ready”, but it may take 70 or more years before the next major quake in this fault.
Read more from this article at the Enterprise Record. This story was also picked up by the San Francisco Chronicle. Via OgleEarth. This is a well done Google Earth presentation, and I highly recommend it.

The Jane Goodall Institutde has developed the Gombe Chimpanzee Blog which is dedicated to the Gombe Stream Research Center in Tanzania, site of the longest-running field study of wild chimpanzee. The blog contains well written content and interesting social commentary on the life of the chimpanzees in the area. The content includes the human names and interpretations of the lives of these wild animals. What really makes it interesting, from a Google Earth perspective, is that you read the blog entries exclusively from within Google Earth. Each blog entry is contained within a placemark which shows the location of the blog entry’s subject matter. Here’s an example blog entry

, you click on the placemark and read the blog entry. Links to further information and photographs are often provided.
There have been many blogs which have started geotagging (placemarking) their blog entries. But, this is the first site I have seen to dedicate their blog content to the Google Earth format. It would be nice if they would provide a network link showing the blog entries from say the previous month all at once. As it is now, you have to click on each blog entry to load each placemark one by one. But, the content is well worth reading and is updated regularly.
In the future, I expect there will be much more geoblogging which will use a combination of Google Earth, Google Maps and other geospatial tools. Ogle Earth wrote recently about a set of tools called Blojsam for the Mac which are designed to enable geo-blogging. I’m sure more tools like this will proliferate as the geospatial tools like Google Earth advance in capability and popularity. 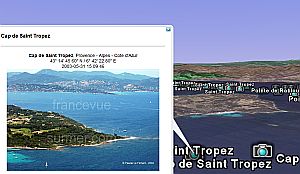 An excellent collection of marine-related Google Earth files is provided by a French software company called Magic Instinct Software. A Peio Elissalde sent me an E-mail about it a while back. He has a number of interesting collections, but my favorite is a collection of placemarks showing 15,000 aerial photos of the coasts of France

which came from francecoastline.com. These are large (about 800×600) photos you can load when you click on the camera placemark icons lined along their route of flight.
Here is a sample of other interesting GE files to be found at the web site:

There are a lot of other interesting things at the web site complete with credits to the data sources. Also, some of the collections have Google Maps mashup versions. Great stuff Peio! 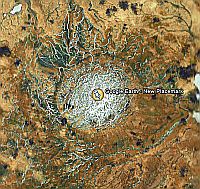 In response to the new Saharan Crater story, I was contacted by E-mail by an Editor at Sky & Telescope Magazine. He told me a reader had recently written them about a crater up on on Melville Island, on the northern part of the Sabine Peninsula. Here’s what Gerald Hanner wrote:

I have read with interest your pieces on impact craters — especially
the ones found on Earth. Some 40 years ago, when I was an Air Force
navigator, I used to fly a route from Fairbanks, Alaska, to Thule,
Greenland. At the northern tip of the Sabine Peninsula, on Melville
Island, my ground mapping radar would pick out a circular structure
with a peak in the middle; it sure looked like a crater to me,
although I never actually got a visual on it.

He goes on to say he recently checked for it in Google Earth, and there he found it very easily in this GE satellite photo

as well), but didn’t have enough data to confirm. Can any other experts comment?
Thanks to Stuart Goldman, Associate Editor for Sky Publishing, for bringing this to my attention.
[EDIT 12:20 EST: Looking nearby, there appears to be an oval-shaped crater just to the northeast of this new crater. Also, there are other possible craters to the south and southeast. Very interesting!] 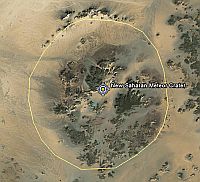 At a site in the Saharan desert on the border between Egypt and Libya, scientists have determined a huge 19 mile-wide crater was formed by an impact of a rock from space. More like an entire asteroid probably. They used satellite photos to help make the determination. Provided was a picture from an enhanced Landsat satellite photo. Naturally I had to go into Google Earth to see if I could find it. Not only did I find it easily, but it was quite recognizeable in GE that its a meteor crater

. I’m surprised it took this long for someone to notice! The scientists said this crater is so large it probably would not be noticed except from space. Here’s the story at space.com.
You can check out lots of craters

in Google Earth, and here’s a link to an earlier story I did about the crater collection.