Probably the biggest news in April was the release of a new minor version of Google Earth, the first in nearly two years. It is a minor bug fix release, but it does indicate renewed interest by Google in Google Earth and we are taking it as a sign of good things to come.

Another big news item was the move of the Google Earth Community to a new location. If you haven’t already done so, go and check it out now.

Google have stepped up the releases of 3D imagery with March and April seeing significantly more releases than usual in terms of area covered. As always, you can see the coverage using our KML file

and report new finds in the comments of this post. 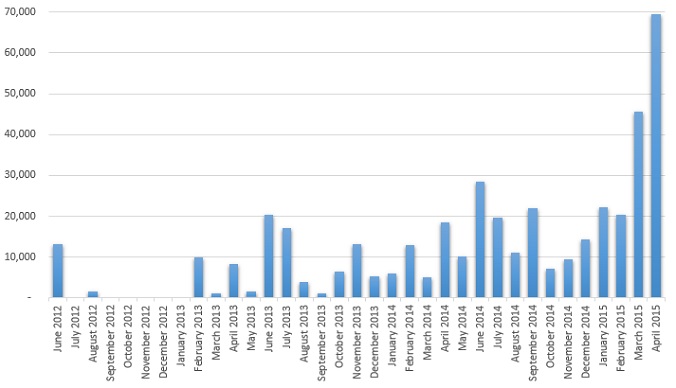 Approximate area in square kilometres of 3D imagery released by Google each month.

Google has been adding satellite imagery, but we will have to wait for their Imagery Updates map, which they have recently been producing monthly, rather than on every update. This month we did a series of posts on how to interpret that map. 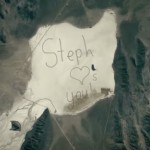 We had a look at a message created by Hyundai from a girl called Stephanie to her father, who works on the International Space Station. 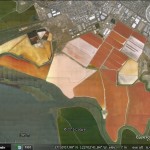 We had a look at some red lakes around the world and the reason for their unusual colour – a type of red algae that thrives in salty water. As GEB reader Chris points out in the comments, there are other causes for unusual colours in water bodies, the most common being pollution from mines or run-off from agricultural land. 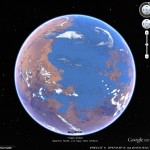 I enjoyed creating the image for the Oceans on Mars story and it turned out much better than I had expected.

What was your favourite GEB story in April?