Google has pushed out a new minor update to the desktop version of Google Earth. The new version is 7.1.4.1529 dated March 30th, 2015. Thank you to GEB reader AC for letting us know first (we have had several other readers since comment on the new version). AC told us about it over 2 weeks ago, but we were unable to confirm until last week as Google pushes out updates of this nature gradually. Your Google Earth should automatically update over the coming weeks, or you can, as we did, re-download and install it from the Google Earth website. We have successfully done this with Google Earth and Google Earth Pro on Windows and the consumer version for Mac OS X. We have also seen comments from Linux users on the help forums. 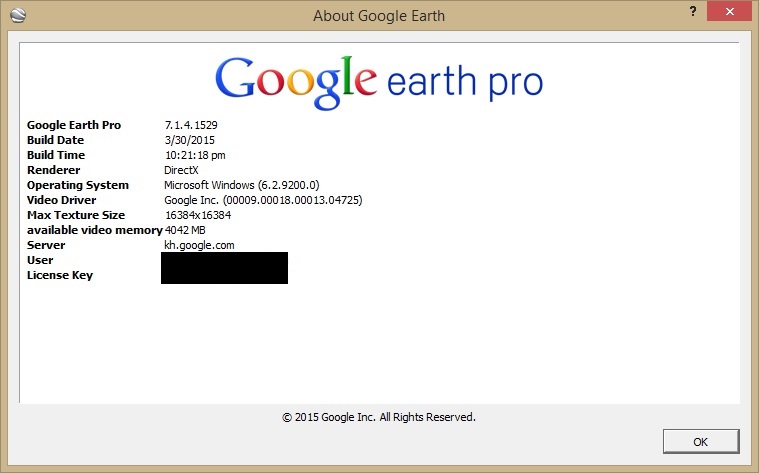 The previous version was 7.1.2.2041 dated July 10th, 2013, so this is the first update in nearly two years! Still, this is very good news as it suggests Google is still working on Google Earth for desktop and supports recent comments from Google about future updates to Google Earth coming.

We asked Google and confirmed just recently what we suspected. That this is a minor bug-fix release for the different versions of Google Earth, and they have not yet started rolling it out to all users yet due to testing with new installer software for some of the platforms. They said release notes will be forthcoming once it becomes more widely available. We’ll report here on the GEB when we know more.

GEB reader AC reported that it still crashes in Street View. We have so far failed to get it to crash in Street View in either the old or the new versions, despite testing a number of places that used to cause the crash. If any of our readers gets it to crash in Street View, please let us know the coordinates in the comments. There have been a few installer issues mentioned in the Google Earth help forums, and Google has responded they are working on them.