Thanks to GEB reader ‘ehog’ for letting us know that Győr, Hungary got the new 3D mesh recently.

Google first announced their method of generating 3D via stereophotogrammetry from aerial imagery in June 2012. As part of the announcement Google said that they expected this new technology to cover “communities of over 300 million people” by the end of the year. A year later, in July 2013, they were doing quite well and we counted around 150 cities with the new imagery. Progress continued, and in August 2013 Google announced that from October of that year they would no longer be pulling models from the Trimble 3D Warehouse as they wished to focus on more scalable methods.

This year we have covered the release of 3D imagery for Tokyo, and other Japanese cities, Christchurch, New Zealand, and London.

However, there has been no easy way to find the new automatically generated 3D areas that Google is adding to Google Earth. Google has not, as far as I am aware, ever released a KML with the locations as it often does for new satellite imagery.

The Wikipedia page for Google Earth also has a list of the new 3D areas, although it relies on helpful people noticing new areas and updating the list, and it, too, is not completely accurate. It does not, at the time of writing, include Győr, Hungary, and does not have all the entries from the Google list, such as Olbia, Italy, for example. 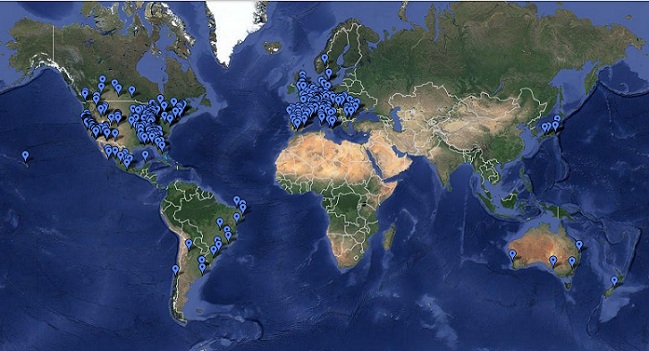 So, we decided to create a KML file combining all the locations from the Wikipedia page, and the list from Google, and a couple of extras that aren’t in either list. And here it is!

We have included locations as given in the two lists, as well as the regions covered by 3D. We have made the KML a network link so that we can continually update it as we discover new areas.

Note that we have not included places that have the older type of automatically generated buildings that load as individual buildings. The newer method loads as a single mesh covering a whole area. Also note that the older type of 3D model does not display in ‘Earth Mode’ in the new Google Maps.

The best coverage is in California, and the worst is in Africa and Asia. Alaska is, I think, the only US state with no locations covered, but with its largest community, Anchorage, having an estimated 298,610 residents in 2012, maybe it didn’t quite make the cut.

If you know of any places not in the KML, please let us know in the comments below.