In April this year, Google retired the old Google Earth Community (GEC) forums that were hosted by Google. The GEC did not die but instead migrated to a new platform, where it continues to be an active community of Google Earth enthusiasts with interesting threads on a variety of topics and some amazing collections for Google Earth.

Today we are showcasing one of those collections: the consolidated impact crater database by GEC member ‘ekafeman’. If you are a long time reader of GEB then you have probably seen similar collections before, as we have looked at impact craters many times in the past.

You have to join the GEC to download KMLs, but it is free and well worth the effort. So head on over and get the KML file from this thread. Be sure to check the key, as many of the marked locations are not confirmed or believed to not be actual impact craters. 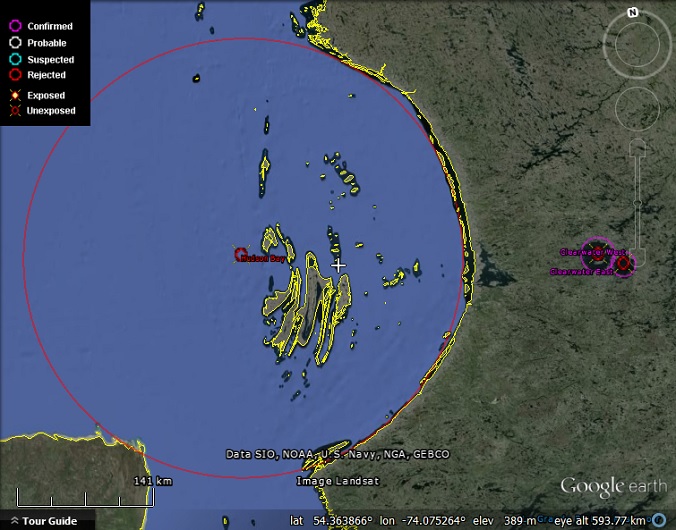 Don’t be fooled by near perfect circles. Apparently the large circle in the Hudson Bay, Canada, is most likely not an impact crater, whereas the two smaller circles to the right are.

Meteors have been in the news quite a bit recently, with both the recent Chelyabinsk meteor and the “near miss” of DA14 attracting headlines.
Over the years we’ve covered a variety of meteor-related uses for Google Earth, and here are a few of our favorites:
Meteor Craters on Earth (from 2005)
Australian Geologist Accidentally Discovers Meteor Crater in Google Earth
Were Carolina bays created by the Saginaw Impact Manifold? 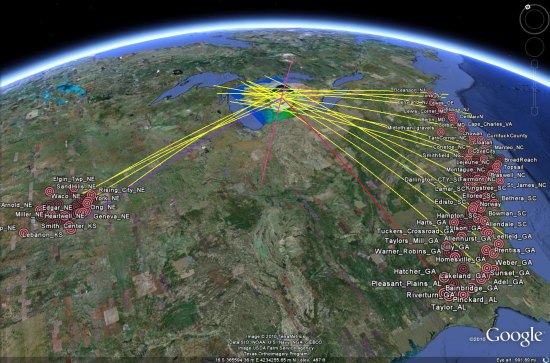 For more recent maps, this post from Geographic Travels lists a few good ones, including Every Meteorite Fall on Earth Mapped and the Meteoritical Society’s Website.
What other great meteor-related resources are you aware of?

A recent story by National Geographic highlights how researchers used Google Earth to discover one of the newer craters on Earth; only a few thousand years old. 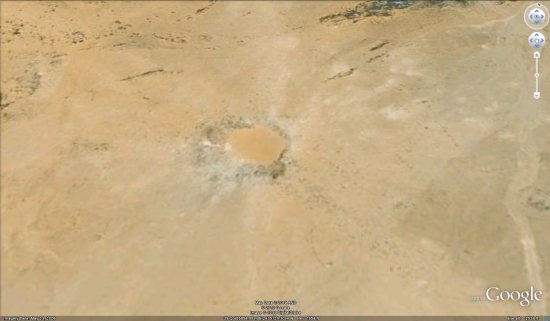 As Stefan at Ogle Earth notes, the findings of some researchers were recently published in the journal Science, they require a subscription. Fortunately, he was able to grab the coordinates of the crater so you can see it for yourself. Simply fly to 22º 01′ 06″ N 26º 05′ 15″ E or use this KML file

to take you there.
Of course, there are hundreds of known craters all across the planet. One of Frank’s oldest posts showcase them, and you can download this KML file

to view them all in Google Earth. 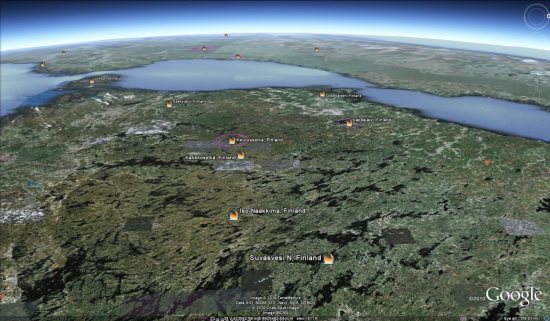 What is the most interesting crater that you’ve found in Google Earth?

If you spent much time in the Google Earth Community, you have have come across a post by Michael Davias about the Saginaw Impact Manifold.
The basic idea behind this theory is that a cosmic impact struck the eastern part of what is now known as Michigan, which spread debris across the country and created many of the Carolina bays that are out there. The impact itself carved out Saginaw Bay, creating the mitten shape that the state currently resembles.
Because this idea is still just a theory, Michael is using Google Earth to try to determine the validity of it. Most of his data can be found in this KMZ file

or via the Google Earth plugin

, the results of which are seen here:

Here are his words regarding the data above:

The kml file has placemarks with annotations that function as an index to the ~180 “fields” of bays being researched. This was done to minimize the memory hit from the collection of LiDAR images being used. Each placemark’s pop-up presents a small jpg of the LiDAR image, and has a link to the actual LiDAR data as a network-linked kmz file. The LiDAR imagery was created in Global Mapper, using their KML generation output feature, and typically contains several levels of increasingly-higher resolution imagery, revealed as the user zooms in. They are big, seveal as large as 10 MB.

For more on all of this, I highly recommend you view the full thread in the GEC. He’s taken a lot of data into account, and done a great job of using Google Earth to present it. 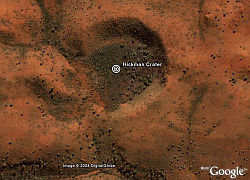 Geologist Arthur Hickman now has a meteor crater named after himself. He discovered Hickman Crater while looking for likely places to find iron ore in mountains in the western part of Australia. He sent a screenshot and the coordinates over to a colleague at Australian National University who later confirmed it is a well-perserved meteor crater between 10,000 and 100,000 years old. via ScienceAlert. You can see the crater in Google Earth here

. There are several folders which show various datasets of craters and some show the size of the craters as well. Also, be aware that not all things that look like meteor craters are. Besides the obvious volcano craters, there are other geological objects which appear as meteor craters but are not. Read this article from NASA.