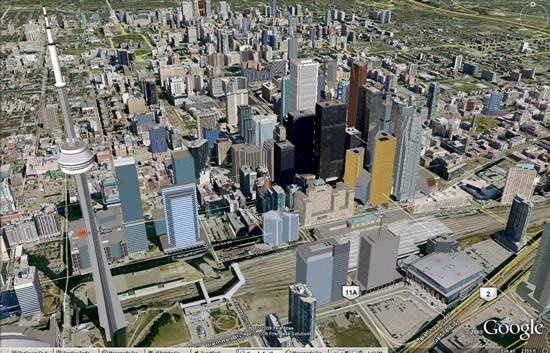 It’s been a great day for those of you that are into 3D models in Google Earth. Joining Vancouver, which got photorealistic 3D buildings earlier this year, Toronto is now in full 3D as well. It’s a very comprehensive update, with virtually 100% coverage in the downtown area, and 3D buildings extending quite a distance out from there.
In addition to that, the latest version of Google SketchUp, version 7.1, is now available. It’s only a “point” release, but it has quite a few new features including:

It seems to be a great release. The ability to automatically pull in StreetView imagery should help speed up the modeling process for many users. Here’s a video showing the new features in action:


[UPDATE We were mistaken about Toronto. Not only was it released earlier this summer, but we even wrote about it. We apologize for the error.]

Once again, in honor of Valentine’s Day, we share some of the best romantic placemarks for Google Earth.
To start, you can check out today’s “My Maps, Your Love Stories” entry from the official Google blog, or the latest entry from Google Maps Mania, which includes a wide variety of Valentine’s Day goodies.
Beyond that you can check out the collection of hearts provided by Google Earth Hacks, or see a video of them in action below:

For those of you that are still looking for love, Random Markers has posted a slick little app that shows recent personal ads via the Google Earth plug-in. It pulls the content from Google Base and then displays them in the plug-in. As per the site, it works best in the US because of the higher density of data to use (more personal ads).
If you’re still looking for more Valentine’s Day goodness, you can view a collection of marriage proposals

The recent conflict between Russia and Georgia has been a huge news story lately, overshadowed by only the Olympics. Taking place in a foreign, unfamiliar area, many people have been turning to online mapping sources to help better understand the situation.
SearchEngineWorld did a comparison of the quality of data in Georgia across the three major online maps (Google, Microsoft, Yahoo). They picked Microsoft as the clear winner, and Google as the clear loser due to a lack of data in the area.
Google has explained the lack of data on their LatLong blog. In a nutshell, they haven’t been able to find data that is good enough in the region, so they simply haven’t posted much of anything. They insist that no data has been removed for political reasons — it’s just never been there. Both Google and SearchEngineWorld agree that basic data beats no data at all, and Google is preparing to launch some new data in Georgia, as well as Armenia, Azerbaijan and “other significant regions of the world”.
If you’re looking for some extended data for the region, there are some good choices. Catholicgauze has posted some excellent files in the Keyhole BBS. Other useful resources include a map of the latest Georgia-related YouTube videos, a nice Google Map-based overview from Maplandia, and a large collection of information in this file on Google Earth Hacks.
If you know of other great sources for map data related to the conflict, please share them with the rest of us by posting in the comments below.
Mickey

Google Blogoscoped has raised an interesting idea: could Google use OCR on their StreetView imagery to improve the accuracy and/or functionality of Google Maps? There are a number of intriguing possibilities:

Other suggestions from the Blogoscoped forums include inserting ads (maybe even overwriting billboards), or using face-detection to try to identify criminals. I think Google would face some serious opposition to the second idea (and maybe the first), but it’s interesting to see the ideas that people come up with.
The tricky part to this is obviously the OCR. You’ve got relatively low-quality photos (at least that’s what they show us), taken with a wide variety of light, at different angles, different fonts, etc. It wouldn’t be easy. However, applications like Evernote with its amazing OCR can give us some hope. Google certainly has the technology and the horsepower to get this done, but I wonder if they’ll try it or not?
What other cool things could Google do with this if they decided to implement it?
Mickey

Along with the standard “Model Your Campus” contest that Google held, they concurrently held a contest for students at ITSEM (The Technology Institute of Monterrey), with the intention giving an award to the best model created by a student from that school.
After 111 submissions from 22 ITESM campuses, David Gómez-Urquiza Madero and Ricardo Pfeiffer Hurtado from the Santa Fe Campus were named the winners.
You can still view all of the campus models in the Google 3D Warehouse, and you can find David and Ricardo’s winning entries here.
This was their second year with this contest (see the 2007 winners), and Google has said that it will continue next year. In addition, the school plans to attempt to model all 33 ITESM campuses. Bring on the 3D!
Mickey