Google has long had the datasets in Google Earth Engine, but accessing it required a Google Earth Engine account, which had certain restrictions on usage. The Google cloud version appears to be without restrictions. The data itself is public data and you can do almost anything you like with it although proper attribution may be required.

More about the individual datasets and how to access them can be found here: General instructions, Landsat, Sentinel-2.

The imagery is provided as unprocessed tiles for each of the optical bands that each satellite provides. To see the images in colour requires processing. The easiest way to do this is with commercial tools from GeoSage. Alternatively, see this post for instructions on how to process Sentinel-2 imagery using GIMP. Landsat data can be processed in a similar way, although it an some extra steps are required to get the best resolution.

The resolution of Sentinel-2 imagery is 10 m per pixel and Landsat-8 is 15 m per pixel after pan-sharpening. Do not expect to see the kind of detail we are used to in Google Earth.

Sadly, Google has not provided thumbnails with the data.

Amazon provided Landsat data via its cloud infrastructure Amazon Web Services (AWS) in 2015 and more recently added Sentinel-2 data. We did a series of posts featuring KML tools to allow you to preview the latest images and make animations from provided thumbnails. The Landsat data on AWS is somewhat limited compared to the Google Cloud offering. Google is providing all Landsat images from Landsats 4,5,6,7 and 8 from 1982 to present. AWS only has Landsat 8 data and even that is only complete data for 2015 and select images from 2013 and 2014.

The image below is a Sentinel-2 image downloaded from the Google Cloud and processed with GIMP. It shows a small part of the Soberanes Fire, California, on September 12th, 2016. To see it in Google Earth (and covering a larger area) download this KML file 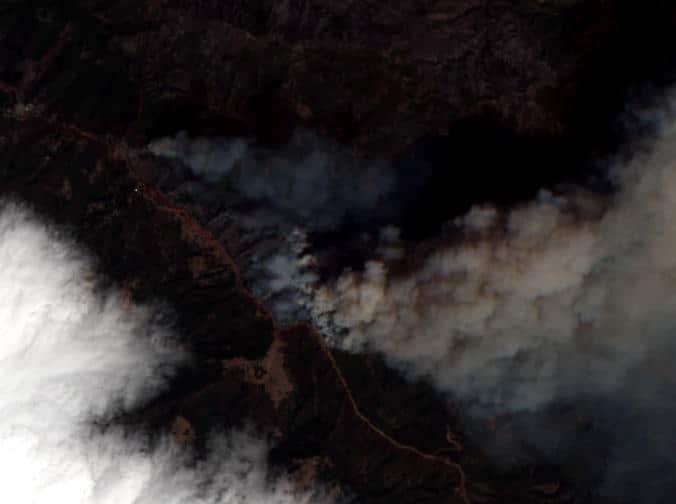