We have previously had a look at a tool by GeoSage for processing Landsat Data. At the time it was free for non-commercial use, but is no longer. It remains, however, the best tool we have come across for that purpose.

GeoSage has recently released Spectral Transformer for Sentinel-2 Imagery, a tool for processing Sentinel imagery. It is not free software, but well worth a look if you work with Sentinel Imagery. More of interest to us at GEB, is the wealth of information about Sentinel imagery and how to obtain it that they have provided on the product page.

The Sentinel program provides their own software called SNAP for processing Sentinel imagery, but we have not yet been able to figure out how to process imagery with it for use in Google Earth.

We downloaded the trial version of Spectral Transformer for Sentinel-2 Imagery and tried it out on some Sentinel imagery downloaded from Amazon Web Services. It was fairly straightforward to use and the resulting image can simply be drag-and-dropped into Google Earth Pro.

We tried it for the region around Katie, Oklahoma which experienced a number of tornadoes on May 9th, 2016. However, the only image available after that date was captured on May 25th and has excessive cloud cover. We tried false colour imagery using one infrared band (B08,B04,B03) but that was no better. So we thought we would try the shortwave infrared bands (SWIR), but that caused Spectral Transformer to crash on the final step, where it uses one of the 10m resolution colour bands to “Pan” sharpen the imagery (the SWIR bands are 20m resolution. So it looks like they still need to iron out a few bugs. However, the SWIR image at 20m resolution was created and could be viewed in Google Earth Pro.

[ Update: I tried running the same imagery combination the next day and it worked without crashing. I also got feedback from GeoSage suggesting it might be a RAM related issue (not enough free RAM). So if you encounter this problem try closing all other programs before running it to see if that helps (and possibly reboot first). If that does not work then contact GeoSage. ] 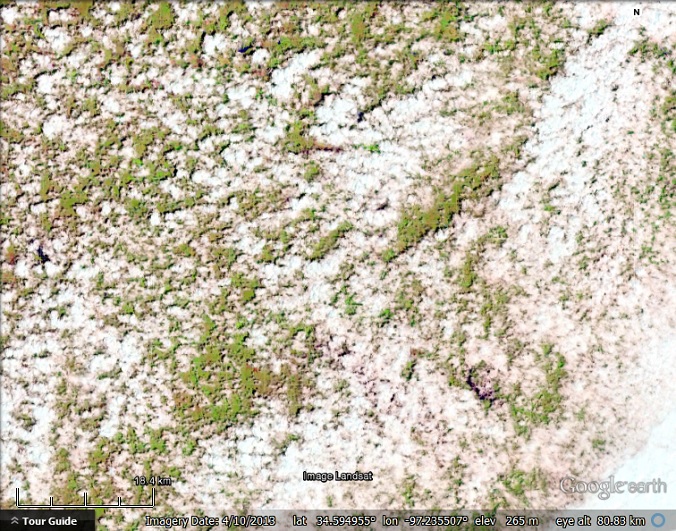 Try as we might, we just couldn’t see through the cloud cover. Copernicus Sentinel data, 2016.