When you place a 3D model in Google Google Earth you can use KML to decide how close the viewer has to be in order for it to be visible. For technical details on how this works and how to implement it see the KML documentation. This effect doesn’t just apply to 3D models but works for other KML features, such as placemarks and polygons. Google Earth Pro uses this concept for the regionation tool we looked at last month.

Today we are looking at how a similar effect is used by Google Earth to display its 3D imagery. As you fly around in Google Earth, you will notice that the 3D imagery fades out in the distance. However, if you actually measure the distance that it fades out, it varies considerably from location to location. It also varies depending on what screen size you are viewing Google Earth at. At full screen we found that for parts of New York, the limit is about 8km, whereas in Tokyo it is up to 30km.

Clearly, Google sets the maximum view distance for each piece of 3D imagery and they are not consistent. In fact, in New York there is a curious effect where you can sometimes see more distant imagery but not the imagery in the mid-field.

Presumably the reason for implementing the maximum view distance is to avoid possible issues with too much 3D being displayed at once. However, we believe that the maximum distance displayed could safely be increased quite a lot and we hope Google will consider increasing it. 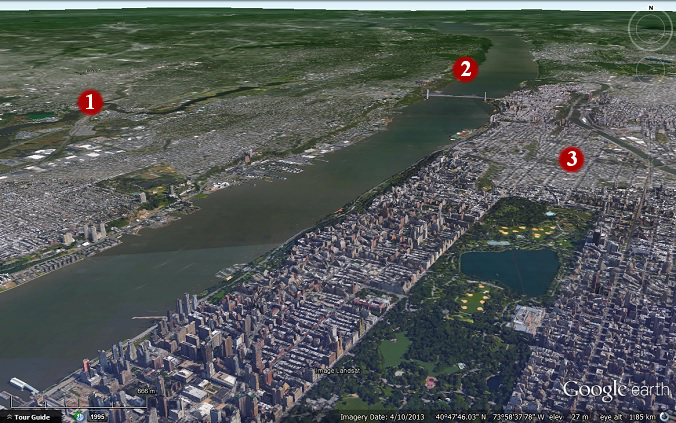 In the above view of New York the old type of 3D buildings (1) from the Sketchup 3D warehouse can be seen at great distances, far exceeding that of the automatically generated 3D. The bridge in the distance (2) and the neighbouring buildings become visible before some of the nearer 3D imagery (3) next to Central Park.