The satellite Sentinel-1B was launched earlier this week. It is the second satellite of the Sentinel-1 mission, the first of which, Sentinel-1A, has been in orbit since April 2014. Together they operate as a team to cover the whole planet every six days. They are not optical satellites but work with radar, which can operate day or night as well as see through clouds. They follow a polar orbit similar to the one used by the Landsat satellites, whose coverage pattern you can see here. We believe this map showing the deformation after a large earthquake in Chile last year was created using data gathered by Sentinel-1A.

The Sentinel Missions are developed by the European Space Agency (ESA) on behalf of the joint ESA/European Commission initiative GMES (Global Monitoring for Environment and Security). They are in many ways similar to the Landsat missions. The Sentinel-2 mission consists of optical satellites with similar orbits and coverage to the Sentinel-1 satellites. Sentinel-2A was launched in June 2015 and Sentinel-2B is expected to be launched sometime this year and there may be more, 2C and 2D, to be launched in 2021 or later. Sentinel-2A has a resolution of about 10 m per pixel, which is better than Landsat 8, which is 30 m per pixel.

Data from the Sentinel missions can be obtained here. It requires registration, but the Terms and Conditions suggest that anyone may use the data for almost any legal purpose, although correct attribution is required. We tried downloading data from Sentinel-1A, but did not know how to process the data, so all we saw was a completely black image. We then decided to get an image from Sentinel-2A of Mt Egon, Indonesia. It is a volcano which erupted on January 19th, 2016. We chose an image dated January 20th, 2016, which was a 4.4 GB download. Again we didn’t know how to process the imagery and could only see it in black and white and could not see anything of interest around the volcano.

So, it would appear that at the present time, Sentinel data is hard to access for the casual user. However, this article suggests that that may change, with a new plan to analyse the data being gathered and open source the results. 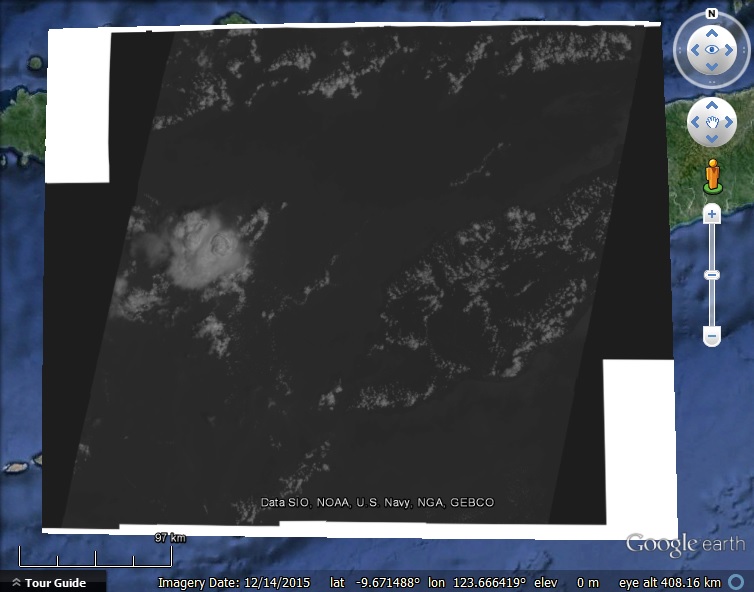 The best we have managed to achieve so far. Copernicus Sentinel data 2016.

If any of our readers knows the easiest way to obtain and process Sentinel data please let us know in the comments.