According to the changelog, the following issues were addressed in this update:

These are some nice updates.  We’ve had a number of users write in confused about the directional arrows appearing when they didn’t expect them, and the tweaks the LEAP motion controls will be nice to have.  While I’m quite pleased with how well the LEAP works with Google Earth (read our full review), it certainly could stand a bit of fine-tuning.

Go out and download this new update from the official source at earth.google.com.

My Leap Motion controller arrived a few days ago and I’ve been spending some time getting familiar with it.  The SpaceNavigator has long been my favorite controller for Google Earth, but the Leap Motion is pretty neat.

The first few minutes with it were awful, but once I learned a few tricks things improved quickly.  Here is a short video showing off some of those tricks:

My day-to-day use will still likely be handled with the SpaceNavigator, but control via the Leap has improved quickly as I got used to it. The two keys, as shown in the video above, are:

Do you have a Leap Motion yet?  What do you think of it? 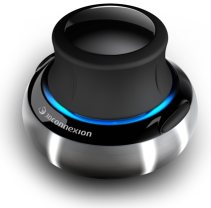 With the LeapMotion finally launching soon (hopefully), I thought it’d be fun to once again take a look at the current king of Google Earth controls — the 3DConnexion SpaceNavigator.

It’s been nearly seven years since Frank introduced the SpaceNavigator to all of us, and I thought it was time to give it another look. I mentioned a while ago (in the comments) that the iPhone version of Google Earth (with multi-touch control) was similar to using a SpaceNavigator when compared to the single-touch version on Google Android devices (which has long since incorporated multi-touch as well). I thought I should explain what a SpaceNavigator actually is for those that don’t yet know.

You can get a pretty good idea of what it can do by watching this video that Frank made a while ago that showed off some of the basic features of it:

Here we are years later and I still use mine every day. It’s a wonderful tool, and Google Earth simply wouldn’t be the same without it. It works for Windows and Mac, and you can pick one up at the 3DConnexion online store, or at a handful of specialty retailers.

Google Earth 7.1 has just been released!  Among the many bug fixes and enhancements is native support for the Leap Motion controller, due out in the coming months.  We discussed it earlier this year as possibly an excellent controller for Google Earth, and their latest video has me even more excited — check it out!

As for other enhancements in Google Earth 7.1, they’re mostly found in the latest version of Google Earth Pro.  The two new capabilities over there include:

Map-Making: Create legends and scales and add titles to a map, directly from Google Earth Pro. You can also print your customized map or save it as an image. To conduct an environmental survey, for example, enhanced map-making tools let you highlight changes to land mass over time and document those changes directly in the map by adding a legend.

Viewshed: Identify and calculate viewpoints, measuring distances and visualizing potential views. For example, an architecture firm could use the viewshed tool to measure a view from a building or window without being physically on-site.

You can read about those enhancements on the Google Enterprise blog, or learn more about Google Earth 7.1 from this post on Google+.

To get a copy of Google Earth 7.1 for yourself, simply download it from their site.  Have fun!

After you have a chance to play with the new version, leave a comment and let us know what you think of it.