The Associated Press has published a story (picked up by all the news media) after interviewing Vice Adm. Robert Murrett, director of the US National Geospatial-Intelligence Agency (NGA). This organization oversees and funds sources of satellite photos used by both defense organizations as well as imagery for public consumption. DigitalGlobe, the primary source of satellite photos for Google Earth, has already benefited from government funds. With the help of about $1 billion from Murrett’s agency, DigitalGlobe, and its competitor GeoEye, plan to launch new satellites with higher resolutions later this year. Government regulations will require resulting satellite photos shared publicly from these satellites to be at a resolution no better than .5 meters per pixel.
Interestingly, Murrett says: “I could certainly foresee circumstances in which we would not want imagery to be openly disseminated of a sensitive site of any type, whether it is here or overseas.” He goes on to say they may exert “control over” imagery in some unspecified manner to sensitive locations. This could mean not allowing imagery for certain locations to be shared, or somehow altering imagery for those locations.
Some industry experts believe it may be difficult for one agency to limit the dissemination of such imagery. There are image providers now from several international satellite companies as well as aerial photographers. And the demand for high resolution photos for applications like Google Earth is increasing. “…this cat may be out of the bag for good. It’s just not clear that the legal or other tools needed to restrict disclosure are available.” So says Steve Aftergood, a secrecy expert with the Federation of American Scientists.
via SlashGeo via SlashDot.

[UPDATE April 11 – 2130 ET – Updated list based on the announcement]
Google has quietly (I’m waiting for an announcement) just released some new layers for Google Earth. They also have re-arranged the order of some of the layers so they make more sense.
Here’s some highlights of what I’ve found so far:

Google has just today released a big update to the Layers inside Google Earth. Many people don’t realize there is even more information buried in the layers than the images of the Earth itself. Now, Google has added even more. Here are the highlights of this update (from this post by Google):

[UPDATE 2010: some edits were made to the list and are highlighted in blue.]
[See the YouTube Swiss Alps Flying Tour.] 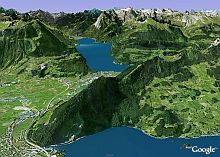 The update of imagery mentioned over the last few days for Google Maps is now available in Google Earth. Swiss Alps terrain is in high resolution (10 meter)! This is awesome to behold! .
Here’s the scoop from Google on what is new:

Check out OgleEarth’s review of the new Swiss Alps data.
By the way, I wanted to point out that a GEB reader named Jonas was the first to point out the new Denmark imagery to me on Feb. 26th. Thanks Jonas!

Rather than trying to deduce all the updates to the layers this time, I asked the GE team what were the layers updated this weekend. Here are the details: