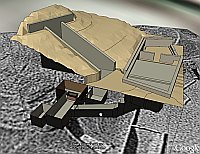 The tomb of Tutankhamon – also known as KV62 in the archeological world – was the most intact tomb of a pharoh of Egypt ever found. It became very famous for the wealth of treasure it contained. Someone at the Google Earth Community called ‘atf’, who is from Zaragoza, Spain, posted an excellent 3D model and an aerial photograph of the area to help you visualize Tutankhamon’s tomb.
Since Google Earth does not currently allow you to place models below the surface of land, how do you show the location of a tomb? ‘atf’ used a method similar to one I wrote about last month. He took his subsurface model and ‘floated’ it above its actual location. Look at the model of Tutankhamon’s tomb

, and you can see the stairs leading down to the burial chamber. A few important things to note: make sure you have the “Terrain” layer turned on and that your Preferences have “Elevation exagerration” set to 1.0; raise your altitude a bit and then double-click on “Tumba de Tutankhamon” to get a good view; If you open the folder you can see ‘atf’ has provided several views of the various chambers and corridor. Excellent work ‘atf’!
See Wikipedia entry on KV62 – Tutankhamon’s Tomb. 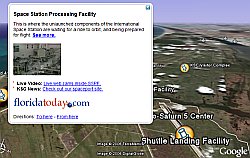 as well. You will find placemarks with links to more information about KSC. Google Maps Mania just wrote this story about it:

Florida Today has included an interactive Google Map on their site which maps space launch sites at Kennedy Space Center and Cape Canaveral. It includes a database of every launch since the dawn of the space age, shuttle and rocket launch video and images, and video tours inside facilities people usually don’t get a chance to see guided by its space reporters. It also has an enhanced 3D Google Earth version you can download as well. This is a great example of a newspaper using its historical archive to create a maps mashup for visitors from all around the world.

Thanks to Mike at Google Maps Mania, for bringing it to my attention. Now we just need some enterprising Google SketchUp modelers to create some 3D models of the Vehicle Assembly Building, launch pad, and a space shuttle or two for the pad and runway. 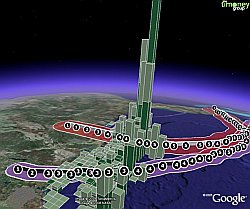 GulfImpact.com was just released today by the Timoney Group. Gulf Impact is a powerful demonstration of how Hurricane Katrina and Hurricane Rita affected the Oil and Gas Industry assets in the Gulf of Mexico. Brian Timoney is a GIS professional who really believes in the power of 3D visualization and provides consulting services to businesses interested in reaching the public using Google Earth.
The Timoney Group conducted tests to determine how best to present the data. There are over a dozen layers of data including oil pipelines, oil platforms, gas pipelines, hurricane paths, before/after production rates, and analysis tools. They chose a dedicated web site with an entry choice based on the type of person entering (general audience, energy professional, geospatial professional, or you can see the entire list of layers). The bar graphs showing the 2004/2005 production rates help illustrate just how serious the damage affected the industry. Try turning on hurricane paths

and the bar graphs for oil production

(’04/’05) for example. I highly recommend visiting the site for the full effect though.

END_OF_DOCUMENT_TOKEN_TO_BE_REPLACED

The British Columbia Chapter of the Sierra Club of Canada has release a map for Google Earth showing how a projected rise of six meters to the sea level will do to the Vancouver area. The map is based on articles which appeared in Science 24-March-2006 which projects sea level rise due to melting glaciers between half a meter in 100 years and up to 10 meters in the coming centuries due to global warming. Vancouver may not see the effects right away, but the Sierra Club thinks we can all take steps right now to help prevent the worst from happening.
You can read the press release here which speaks briefly about the possible effects to Vancouver. Or you can just download the prediction map here

. The blue areas show the primary flooded areas. Placemarks indicate areas of the region effected with details of what percentage would be submerged. You can use the transparency slider to see what lays under the water in the satellite photos. The primary prevention step they suggest is to reduce carbon emissions. Personally I think there are other issues involved, but I think that’s one good step to take.
The Sierra Club has also used Google Earth for informatoin about the Arctic National Wildlife Refuge. And information about a proposal by the US Government to sell public lands. Check out many other stories about the environment here at GEB – Google Earth Blog. 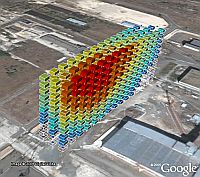 Last week, our friend Valery Hronusov from Russia’s Academy of Science in Perm, Russia (aka Valery35 at the Google Earth Community) posted a series of Google Earth files to illustrate radiation quantities at the Chernobyl site. Chernobyl (located in Pripyat, Ukraine) was the site of the worst nuclear power disaster in history and occurred 20 years ago on April 26, 1986 (see Wikipedia story). It turns out Google Earth now has a high resolution photo for the Chernobyl disaster (not sure when that got added).
You can visit Chernobyl and see Valery’s visualizations below. There are more examples in his post. Valery used a GIS tool he has helped develop called KMLer.

By the way, you would think the site of the worst nuclear disaster would be empty of life. But, in fact people work nearby there today. And animals have seen a startling comeback (in the absense of a lot of people living near the site). And trees have overtaken the nearby building northwest of the site. Read this BBC story about it.