On Monday, Google introduced some new layers to Google Earth under the title ‘Voyager’. They all contain information that was previously available, but not as easily accessible as in the new layers.

Today we are looking at the new layer called ‘Satellite imagery updates’. This layer shows the outlines of imagery that has recently been added to Google Earth. Google has published this information in the past, most recently via this Google map. There are, however, a few key differences between this new layer and the Google map:

Since we are allowed to access the KML, with the help of this useful website we can work out the total area of the new imagery by continent:

Note that no allowance has been made for overlapping imagery, so the above figures are the area of the imagery added and not the area of land surface covered. 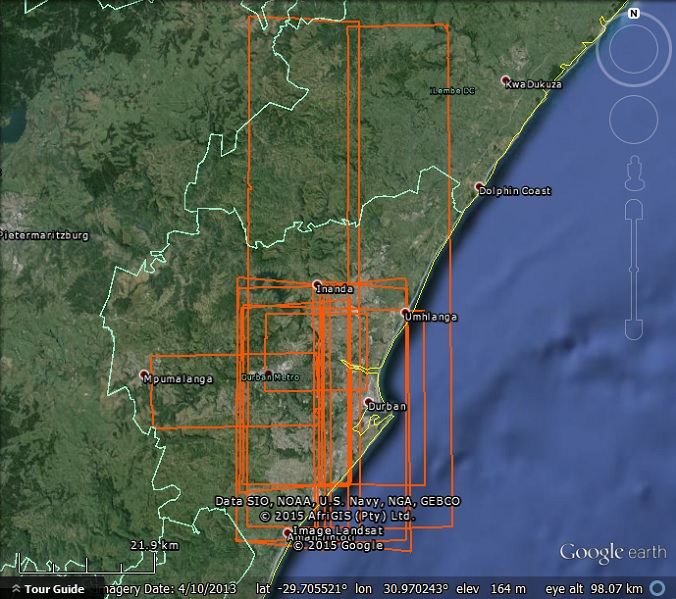 Durban, South Africa, got a lot of imagery – we don’t know why.

It must be noted that imagery displayed in this layer is not necessarily recent imagery. To learn more about interpreting Google’s imagery updates maps see this series of posts. The oldest image we have found so far in the new layer is of the Japanese Island of Kuchinoerabu captured on September 19th, 2012. We believe it was added because of the volcanic eruption on the island that happened in May this year. Imagery of the eruption itself has not yet been added to Google Earth, but this old image might have been added to aid rescue workers.

We have also noticed that imagery of Guam captured in May has been added to Google Earth. This is imagery that relates to Cyclone Dolphin that struck Guam on May 15th, 2015. Although the imagery is from the days following the Cyclone, we have not been able to identify any damage caused. This imagery is not noted on either the new layer or any of the update maps published by Google. This suggests that there have been updates since the new layer was made.