Paul van Dinther has created some amazing tools for Google Earth over the years, including the game Ships and the Google Earth Diorama. He’s now working on a project with the Ájtte museum in Jokkmokk, Sweden that is simply amazing — it’s essentially a Liquid Galaxy gone crazy.
Paul worked closely with Pedro Domecq (winner of Model Your Town 2012) to have a few land marks modelled specifically for the exhibit. The models are the Ajtte museum and the church right next to it. The Ajtte museum is not published yet. Pedro also made some of the buildings that are exhibited on the museum grounds. The project makes extensive use of Google earth and real panorama photos and cross fades between them.
Below is Paul’s story of what he’s building. Be sure to follow him on Google+ at +Paul van Dinther to keep up with the progress of this project. 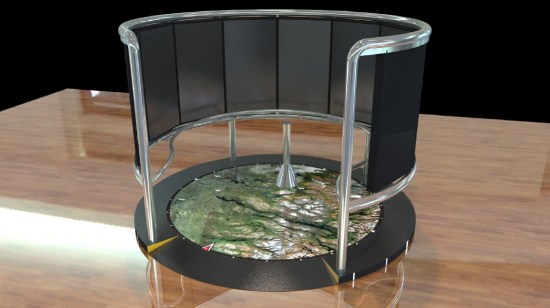 ———
Mid 2011 I was approached by Ájtte museum in Jokkmokk, Sweden with the request to build a Google Earth based helicopter simulator to allow visitors to explore their pristine natural Laponian heritage area. I declined as I did not think that the idea suited the purpose. After some discussion I proposed to build a system based on “Diorama” with surround views like Liquid Galaxy. You may have seen some of the research I did in this direction on my Google + page where I had up to 9 Google Earth instances running in a browser. However Google Earth is simply not reliable enough to use in a museum environment. It crashes too often. Also developing solutions on based on Google Earth has become risky. Google is not keeping their third party developers in the loop. The unexpected big mapping announcements from Google with their new 3D data, their change to a 1 year deprecation policy plus the poor support for Google Earth plugin helped me decide to switch to video technology.
A-tour should be seen as a piece of presentation furniture that is capable to display amazing interactive multi media presentations. The large external cylindrical wall forms a perfect surface for additional printed graphic displays. This exhibit is perfect for tourism promotion, museums, advertising and many other applications. The presentation content can change over time and we can manage the software and content remotely via the Internet. The exhibit required virtually no IT support due to the specialised hardware. The solution is very robust. It is a matter of plugging in the power and 10 seconds later the exhibit is up and running without the need to touch anything else.
Full interactivity is over-rated in this context. Anyone who has observed someone playing with Liquid Galaxy would most likely have come away feeling nauseous and not quite have picked up much from the blurry partially loaded landscape in which the user managed to get himself hopelessly lost. 3D navigation is hard. The use of video enables me to work with the best image quality possible while ensuring that the motion is smooth and pleasant. GExplorer has been very helpful with this. Of course video also enables the exhibit to run independent of the Internet or software updates.
A-tour uses 9 large 60 inch 1080p displays on which a 9720 x 1920 pixel video is displayed. Each screen is placed on it’s side and contains stereo speakers. This gives us two rings of 9 speakers plus the normal 5.1 Dolby digital system and the sub LFE floor system. 23 discrete speakers enable us to move the sound field around but also up and down. Near your feet you will hear a stream while birds are singing above your head. The floor system deserves special mention. The 8 foot diameter floor is a steel frame covered in plywood and suspended on 21 rubber feet. A Buttkicker LFE is bolted directly to the frame and is powered by a 2000 watt amplifier. The floor is capable to reproduce frequencies all the way down to 0.5 Hz It really transitions smoothly from audible down through gut wrenching to teeth rattling. With such tactile feedback range we are able to engineer custom sub LFE sound waves that work in conjunction with the visuals. 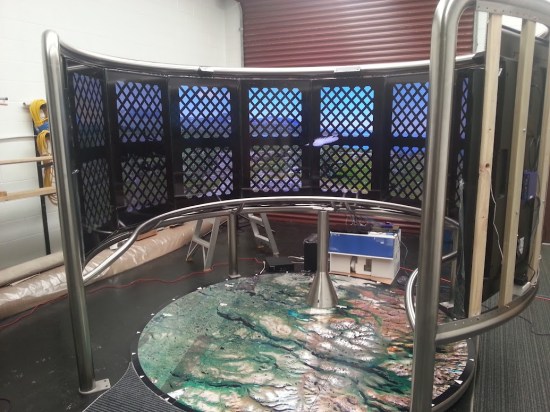 Technically the switch to video has been a fantastic decision. The idea in fact was handed to me by my son Tom. It completely protects the system from software updates, future policy changes etc. Using video also means that it is easy to bring in other elements such as cross-fade to high resolution panoramic photos, Super imposed actors etc.
I did not rely on tour recording in Google Earth because it can be jerky due to data-loading. Instead wrote an external windows application to do this job. This application also translates the camera positions for each of the screens. Thanks to Xavier Tassin for making his camera translation code for Fluid Nebula available to me. The mathematically perfect KML tour is then used in Google Earth Pro to create frame by frame video renderings.
Unfortunately that is where perfection ends. There still are many issues, limitations and bugs in Google Earth Pro which make top quality video renderings a challenge. Hopefully they are mostly ironed out in Google Earth 7. I am also looking at new technology besides Google Earth. I already use high-resolution panoramic images and the next step is a surround view 3D Android platform with the aim to have purpose build mini computers that only do one job well with minimum overhead and no crashing. Next year I also hope to have the first prototype ready of a light weight 360 degree video camera that can produce high resolution surround video footage at 12960 x 1920 px (12x 1080p).