Over the years we’ve shown you a lot of cool stuff from Paul van Dinther, including great games such as “Drive the A-Team Van” and “Ships“. He’s back with a huge new project that he’s been working on for months, and we’re thrilled to be able to show it to you: Diorama.
He calls it “Diorama” because there are many websites that have made attempts to utilise Google Earth to show map related information but invariably they all use static views and boring place markers to tell their story.
There is a lack of story telling tools for Google Earth and he decided that this can be done much better. Developing a fully customised Google Earth presentation is expensive but he had learned enough about the requirements to design a generic presentation engine that will meet most needs. Diorama runs on top of Google Earth and can be embedded into users web-pages. With Diorama, website owners can easily build very rich presentations using the simple sequence based Diorama API and the browser based code-builder toolkit. 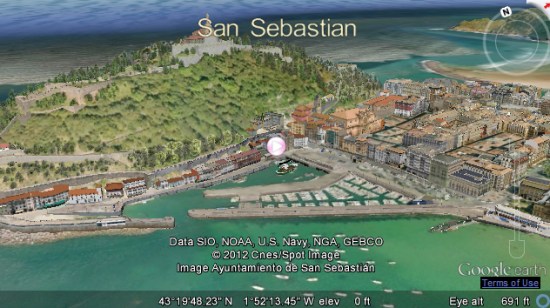 Diorama can do so much more than other tools because it is not limited to the capabilities of KML. Diorama makes heavy use of the Google Earth API thus getting around the many timing limitations that are associated with KML tour data. He plans to grow the functionality of Diorama with the addition of a browser based editor, model animation and many more exciting new features.
If you’re not able to visit his Diorama page to view it right now, here’s a quick video that shows how it works:

Pedro Gipuzkoa, who has built some amazing 3D buildings in Spain, is using Diorama to show off his work in a Google Earth modelling contest. You can view his Diorama here.

Paul’s new project is very powerful, and could be quite useful in a variety of applications. His command of the Google Earth Plug-in is nearly unrivaled, and now he’s given the rest of us an easy way to create awesome interactive experiences for our own website visitors. Learn more about how it works and how to get started at planetinaction.com/diorama or watch a short tutorial video here: