So you’re cruising around Google Earth and you find something really cool that you want to share. How do you do it? Here are a few ways:
Save a KML file
This technique is as old as Google Earth, and still quite popular today. Add a placemark to the map, right-click on it in the “Places” menu on the left, and choose “Save Place As”. The resulting KML or KMZ file can be sent to anyone and they can quickly view that location in Google Earth on their computer. You can also submit it to places like the Google Earth Community or Google Earth Hacks to show it off to a wider audience.
Use the “Share” options
Google Earth 6.2 made it easier to share items directly from Google Earth by simply clicking the “Share” option in the upper-right corner. 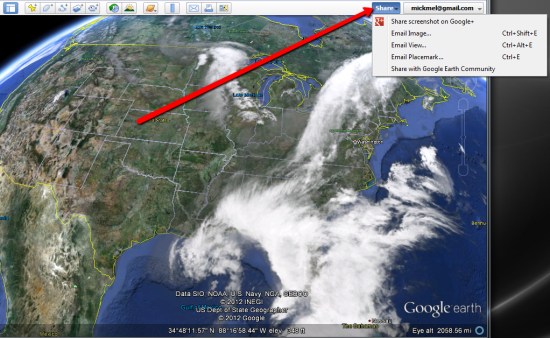 • Share screenshot on Google+: This is a nice feature, but disappointing that it only shares a screenshot. We’re hoping in the future that it’ll include a linked KML file so that your friends on Google+ can quickly visit that site in Google Earth.
• Email Image: Quickly grab an screenshot and email to a friend. You can also quickly save a screenshot by going to [File] -> [Save] -> [Save Image]
• Email View: Similar to the previous option, but this generates a KML file and sends that to your friend.
Use a site like EarthURL.org
With EarthURL.org, you can use the Google Earth Plug-in to browse around the globe and quickly share locations with your friends. What’s very creative about this site is that the page URL changes in real-time while you’re browsing around. At any point, you can stop moving the globe and send the link to your friend and they’ll immediately arrive at that same location. They also have quick “copy” and “Tweet” links at the bottom of the page. I had created a similar tool called ShareIt back in 2008, but EarthURL is a much better implementation of that idea.