Google has released yet another new feature for Google Maps Street View. It automatically shows you relevant Panoramio photos for a given location (assuming there are photos available for that location) while viewing Street View imagery. Read the post for examples. Unfortunately, the feature isn’t available for Google Earth. I think the new release is a by-product of the Panoramio “Look Around” feature which came out last spring.
Since Google Earth didn’t get the new feature, I got to thinking how you would go about implementing something like it in Google Earth. What suddenly occurred to me is that with GE 5, we might be able to run Panoramio Look Arounds right in a GE placemark window. So, I gave it a try. Sure enough, without too much effort, you can view a Look Around in a placemark. I’ve suggested to Google they could come up with a network link that would automatically show Look Around placemarks, and improve the application so it runs well in placemarks. I think it would be a powerful new way to look at Panoramio photos. Powerful enough to be its own layer I think – or maybe a sub-layer to the Panoramio layer. To see one in action, I’m using a Panoramio Look Around for the Empire State Building in Google Earth. Load this KML file

and open the “Empire State Building” placemark. Then play with the Look Around interface to see the photos. Cool huh? 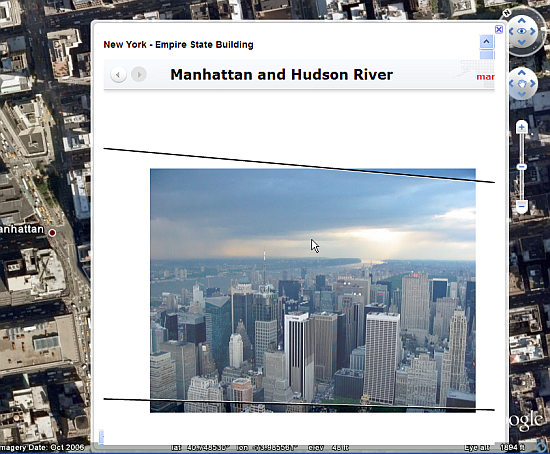 NOTE: The current Panoramio Look Around application was not intended for use this way. Some of the UI features don’t fit very well in a placemark window. You may have to open your GE window larger (and more square) to see the UI better. I’ve sent an E-mail to Google’s Panoramio team suggesting they make a new layer or KML network link to view Look Arounds this way. It would be really handy I think. Here is the original Look Around for the Empire State Building.