Thank you to GEB readers Frank, Manuel, Jim and Gabriel for letting us know that the Panoramio photos are not displaying in Google Earth. The layer and placeholder icons are there but when you click on them the images do not display.

In October Google did announce that it was shutting down Panoramio in favour of Google Street View. The announcement said that as of November 4th, 2016, new signups and uploads would be stopped. However, they indicated that users had until November, 2017 to download their photos and optionally transfer them to Street View. We assumed that this meant that they would keep the API that Google Earth uses running until November 2017. It would seem that that may not be the case.

If Google has shut down the Panoramio API it would be a great pity, as many parts of the world have almost no Street View photos whereas, Panoramio has near global coverage. We have recently been experimenting with capturing photos for Street View and the process is not well thought out and it seems to be impossible to put the captured photos in the correct place when Street View misplaces them. It makes logical sense for Google to only have one 360 degree photo service but they really need to improve the Street View offering as far as user contributions are concerned before completely shutting down Panoramio. 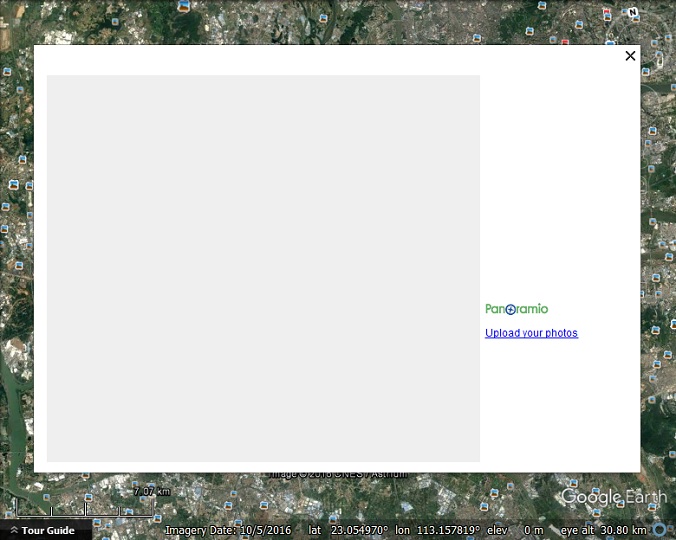 The loss of Panoramio photos in Google Earth is only one of several similar changes. In October two of the Google Earth weather layers were dropped. Recently we also noticed that the Earthquake layer is not updating correctly.

Google has been planning to shut down panoramic photo sharing site Panoramio since September 2014. The initial plan was to merge it with Google Views which was a similar product. However, due to feedback from the Panoramio community they held off that move. Frank did an in depth post about this in June 2015. Since then Google Views itself was merged into Street View. Google has now announced that they are finally shutting down Panoramio for good. As of November 4th, 2016, they will stop allowing new photos to be uploaded or new signups. Users will still be able to access their photos for one year (until November, 2017) at which point the service will be taken offline completely. Users have the option of transferring their photos to their Google Album, and they can optionally also be shared via Google Maps.

GEB reader ‘Hiking Mike’ has written a blog post about the change and some of his concerns about the move. His three main concerns with moving to Google Maps appear to be a lack of community, poor attribution, and the fact that Google Earth doesn’t support user contributed photos. 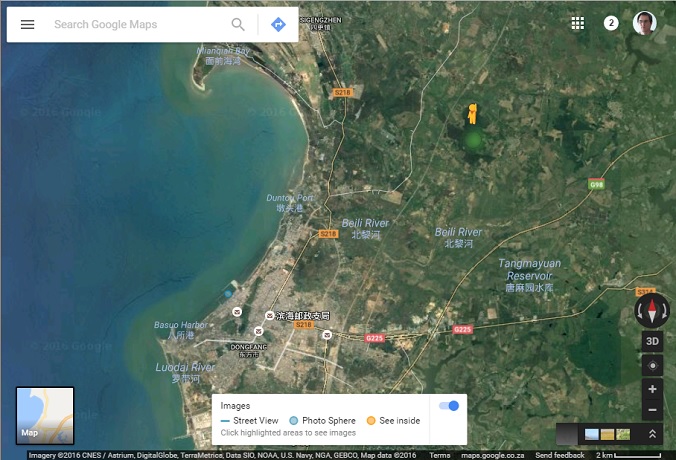 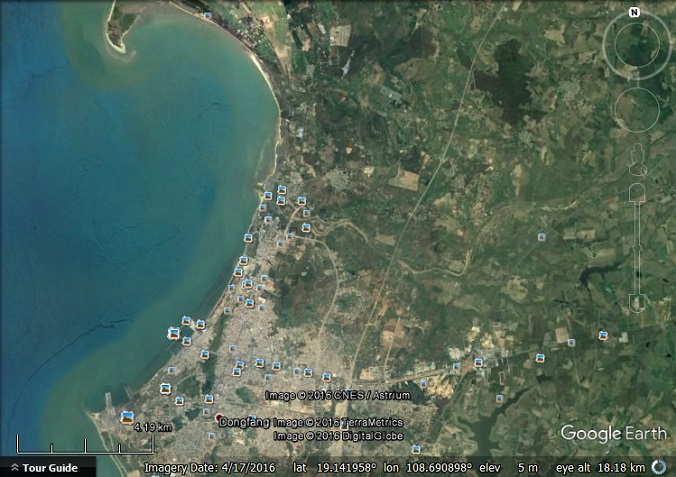 Hainan, China. There are a lot more photos than are shown here. More icons are displayed as you zoom in.

Pretty Earth
Google Earth offers an amazing way to view our planet, but when you zoom in closely the surface is actually made up of various tiles from imagery taken on different dates (here’s how that works).
For years this created a patchwork effect when you viewed the earth from high altitude, but earlier this year Google unveiled “Pretty Earth”, which greatly improved the view of earth from above. The difference is amazing! 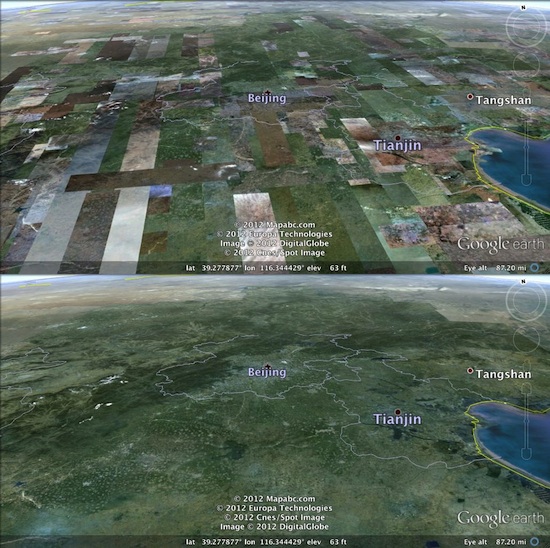 Places Layer
When Google Earth was first released, the “Places” layer had huge list of items under it to select sub-categories. In earth 2010, Google removed the sub-items and created the smart “Places” layer that we have today. As you zoom in, more and more places appear, and it choose the most important ones to highlight first.
After quite a bit of user outcry, they added most of the old sub-categories back into Google Earth for power users to access. They can be found under [More] –> [Place Categories].
Panoramio
Back in 2006, Google added the popular photo-sharing website Panoramio to their “Geographic Web” layer. Over the next few months, the increased exposure helped Panoramio grow from 80,000 to over 400,000 photos.
Google acquired Panoramio in 2007, and by early 2010 (when co-founder Eduardo Manchon left) they had more then 20 million photos in their database! You can explore the photos at Panoramio.com or by enabling the [Photos] –> [Panoramio] layer in Google Earth. 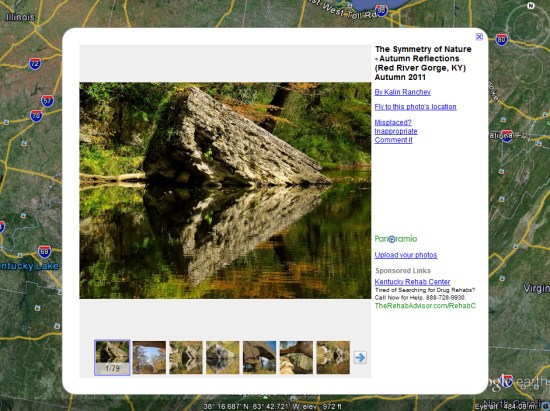 Google Earth Plug-in
The Google Earth API was first released at Where 2.0 2008, and has allowed users to stretch Google Earth to do some amazing things. We’ve seen it used to show motorcycle routes, preview concert seating, assist after the Japanese earthquake, and it powers some awesome games such as Ships, “Drive the A-Team Van” and the GE Flight Simulator. You can see some other great uses of the API over on Paul van Dinther’s PlanetInAction.com.
What’s been your favorite use of the Google Earth plug-in so far?

Last week we showed you the voyage of the Titanic and ways to view 3D models of the ship, and today we’re back with one more way to explore it 100 years after the disaster.
NOAA has just released a collection of photos into Panoramio that are quite amazing. You can view the photos online here (UPDATE: They can also be viewed in the Photos layer in Google Maps now), or explore them via this KML file. 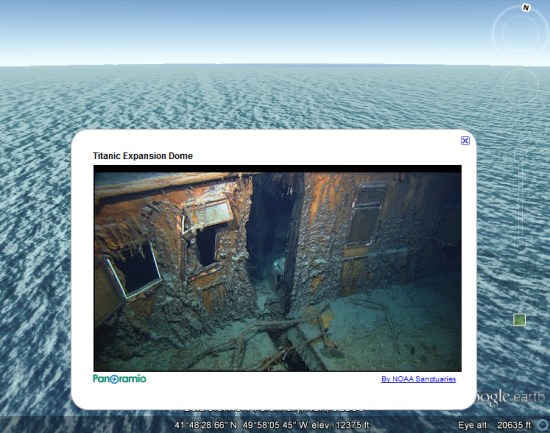 Once the photos are loaded, you’ll need to fly to the area above the Titanic to view them (the photos float on the ocean surface). If you need help finding that location, here is a KML file

that will take you to the right spot. The photos should be in the default “photos” layer soon, but for now you’ll need to use that KML. Thanks to NOAA for releasing and sharing those images with everyone.

For more than five years, since we first learned of Panoramio, photos have been a big part of Google Earth. Being able to fly around and view geo-referenced photos in Google Earth is a great experience. Today, that experience got better.
Google has just enhanced the photos layer with clusters, making it much easier to find and browse photos on the map. To get started, make sure that you’ve enabled the Photos layer in the left layers panel, and then zoom in anywhere on earth. As you get closer, you’ll see icons begin to appear; click one, and you’ll see a screen similar to this: 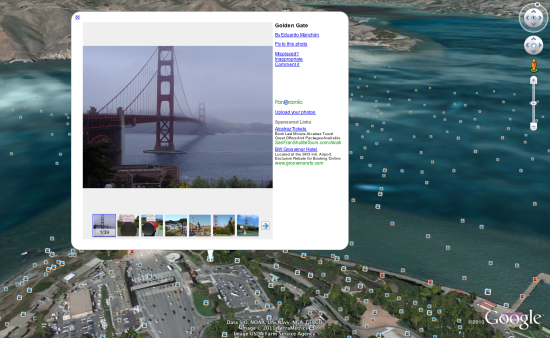 You can then click any item int he filmstrip to quickly view it, or use the left/right arrows on your keyboard to browse through them.
As always, you can add your own photos to Google Earth by simply uploading them at Panoramio.com.