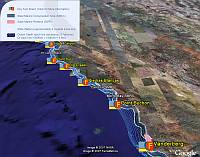 As mankind has spread out over the Earth, the once abundant life in the ocean has been exploited at alarming rates. Fishing has not only reduced fish populations, but also damaged the underwater marine vegetation which are a critical component of ocean life. Pollution has also caused enormous damage and destruction. It may take centuries for these areas to recover, if they recover at all.
On April 13th, the California Fish & Game Commission adopted a landmark plan for marine protected areas to protect the scenic coastline and rich marine habitat of the Central Coast. You can see the new protected areas in this informative Google Earth map

which was developed and published by the Ocean Conservancy organization. The California Commission’s decision will place a total of 18% of state ocean waters off California’s central coast in some type of protected area. Of the overall area of more than 1150 square miles, 8% will be fully protected marine reserves, and the rest will allow limited types of sport and commercial fishing. This makes California the first state in the U.S. to undertake such a large, comprehensive conservation plan to restore its coastal waters.
In my years of sailing the Atlantic and Gulf waters around the US and Caribbean, I have seen the beauty and importance of ocean life. In diving and snorkeling many areas I have seen the delicate balance of our ocean life, and know how important it is to the future survival of our ecosystem. Hopefully there will be increasing efforts on the part of our governments to help protect our future.
See also: