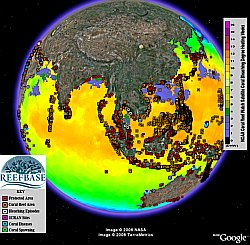 Coral reefs are some of the most endangered ecosystems in the world and, with climate change upon us, reefs are at great risk. Google Earth Blog previously wrote about the work by NOAA at the Coral Reef Watch web site. Recently I was contacted by a former intern of the ReefBase project which attempts to keep track of the status of reefs all around the world. Keene Haywood has converted the ReefBase data into a Google Earth file so you can see some data about each of the hundreds of documented reefs

(NOTE: Best viewed with Google Earth 4) This file is experimental and is not hosted by NOAA, but he hopes they will include it someday soon. Thanks to the big June update, many of the reefs areas now have high resolution satellite photos in GE. You can also download the current NOAA Coral Reef Watch

GE file and turn on the “Sea Surface Temperature”. Keene says: “I hope that this project gives people an idea of the breadth of reefs around the world and the threats facing them. If this project raises some awareness, then I will feel the project has had some impact.”
Important tip: By the way, Keene has used an interesting new feature in the KML 2.1 format which allows large collections of placemarks to be placed in “hidden” folders. This means when you click on a placemark in the folder it does not cause the folder to be opened in the Places pane. This is really important with large datasets. With GE 3 this file takes much longer to open and is more cumbersome to use. Those of you creating large collections of placemarks should look into this feature.