The New York Times reports today on some research being done using Google Earth to help identify new impact craters which may point to a higher frequency of large impacts than previously theorized. A group called the “Holocene Impact Working Group” believe there have been multiple large impacts within the last 10,000 years whereas most astronomers have believed there haven’t been any in longer than that. The new group believes there is evidence of multiple strikes which landed in the ocean. After all, the Earth’s surface is 75% water – so this isn’t surprising. The researchers have been looking for signs on land using Google Earth in the form of “chevrons” which are enormous wedge-shaped sediment deposits. Often these chevrons have fossilized ocean materials and it is believed they are formed by enormous super-tsunamis which resulted from large meteor impacts in the ocean. Already the group has identified several locations dated less than 10,000 years ago which have strong evidence of having been the result of impacts. They have also examined ocean floor data and identified the suspected impact locations themselves. They have taken soil samples from one location and found evidence of melted material only found in impact sites. 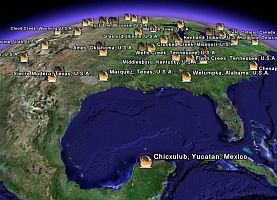 The group who has put forward the theory will be presenting at the American Geophysical Union (AGU) meeting in December. I’m planning to attend the AGU virtual globes meetings and will report if more interesting news is revealed. In the meantime, you might want to check out this collection of 172 large impact crater sites. Also, you might be interested in this story about a recently discovered crater which is easily visible in GE.