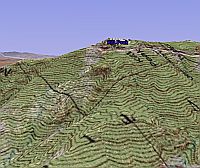 What’s interesting is the unique method for choosing a site. In addition to giving a simple center-point coordinate for a location, you can also upload a GPS track or even a KML file to determine the location for the overlay. If you upload a GPS track it will determine the boundaries of the track and create an overlay covering that extent. Similarly, if you have a KML with placemarks or paths it will use the extent of those points for the overlay extent. Very slick!
As usual with GPSVisualizer, you can use the form to choose from a variety of images and maps including: USGS aerial photos, USGS Topographical maps, NASA Modis satellite photos, NASA Landsat, and others. Some of the data is only good for the US or Canada, and some cover the world. The program will automatically tell you if you’ve provided a location not covered by the database chosen. GPSVisualizer is one of my favorite tools – here are some other stories I’ve written about it: here and here. Great work Adam!