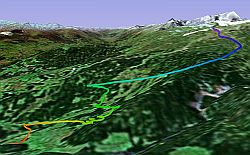 In previous stories, I have mentioned one of my favorite applications for looking at GPS tracks is GPSVisualizer. It is a free web browser application with a simple form-based interface with many capabilities for showing GPS tracks with satellite/aerial photos, street maps, topographical maps, and more. In November, after I E-mailed him, Adam Schneider, the author, implemented a capability to generate Google Earth files from GPS tracks. However, one of my favorite capabilities in the pre-GE version of his application was the ability to colorize the tracks according to various parameters (such as altitude changes, speed, course, etc.). Unfortunately, his initial GE form didn’t support this colorizing feature.
Well, Adam wrote me this weekend to let me know he had implemented colorization for his Google Earth form. I immediately tested it with flight, and other GPS data, and it works very well! By the way, GPSVisualizer supports a variety of input file types in addition to GPX. For example, I tried an IGC file format which is the format used by paragliders because it supports certified data for establishing records (longest flight, highest flight, etc.). I went to the Leonardo database of paragliding flights and downloaded an IGC file. Then, I used the new GPSVisualizer form, and uploaded my copy of the IGC file. I then selected “Absolute” for “Altitude Mode”, and “Colorize by” -> “Altitude/elevation”. Then I selected “Create KML File” which resulted in this Google Earth file

. You need to select the absolute mode for altitude so it keeps the elevation data from your GPS track.
If you have GPS tracks of a…

If you have GPS tracks of a hike, a drive, a flight, etc. I highly recommend you try converting your track to a supported format (GPX is probably the easiest). Then try out GPSVisualizer and its new “Colorize by:” feature. The “colorize by” feature supports: altitude/elevation, speed, course, slope, distance, and more.
Adam had to do something clever to make this work. His application breaks up the track into little peices and changes the color for each segment according to the parameter you chose to color it by. Great work Adam!