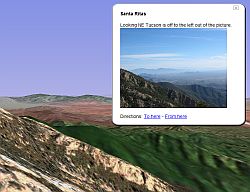 For those of you who are GPS and digital camera buffs, you should definitely check out this program. RoboGEO v2.1 was recently released with support for Google Earth, and does an excellent job of taking a GPS track and georeferences your photos taken during the track. It’s pretty straightforward, you simply: 1) tell it where the photos are; 2) tell it where the track is (supports several formats); 3) tell it the time offset between camera and GPS; and then it georeferences the photos that match the track. You can then generate the Google Earth file and even label all of your photos and add descriptions.
For example, I took the photos from my recent Arizona backpacking trip (which I wrote about earlier) , and used RoboGEO to produce this Google Earth file

(WARNING: this is a 2MByte file). You will see the track in red, green placemarks for the photos, and a bunch of entries in the placemarks pane. You can click the photo placemarks and see photos and descriptions to get a sense of our trip. In particular, on some of the scenic views I tried to duplicate the view in GE from the photo (double click on a photo placemark to see this).
RoboGEO gives you…

RoboGEO gives you several options for saving your GE file with or without the images in the file. This is important because if you put a lot of full-size images in a GE file it will be huge. The file I’ve created uses scaled down (using another program) to 320×240 images so the resulting GE file is only 2 MBytes in size. Alternatively, I could put full-sized images on a server and the GE file would be really small.
If you have a good collection of photos and GPS tracks that go together, I can highly recommend RoboGEO. Especially if you want this quality of Google Earth output. RoboGEO prices start at US$34.95.