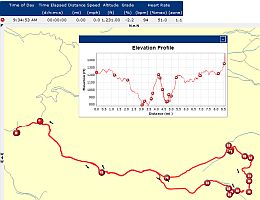 Garmin, the largest maker of GPS systems, has announced it has acquired MotionBased Technologies, a popular developer of software and web based applications for GPS devices. This was a significant move for Garmin, because their application MapSource mostly provides the most basic functionality for manipulating your GPS device tracks, routes and maps.
In fact, I’m surprised I had not discovered MotionBased myself. According to their blog in the 15 months since they released their first beta, they grew to over 11,000 customers and 150,000 activities (by this I assume they mean GPS tracks). They emphasize fitness applications like mountain biking, running, and hiking. But, it can also be used for any other activitiy where you might carry a GPS. Their applications basically make it easy to upload your GPS tracks and be able to visualize the tracks against maps; analyze and chart your elevation changes, speed, and duration; and many other tools for analyzing your trip/run/bike/etc. 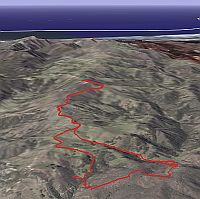 MotionBased added the ability to output your track first to Keyhole and was one of the first applications to support Google Earth. So far they just upload the tracks into GE (the picture here shows the same track as the one above in GE). At least that’s all I’ve seen so far. I’m hoping they take greater advantage of GE features such as network links, placemarks, inputting charts and data as well.
MotionBased provides both free and subscription based services. The free service basically is limited in features and scale, and any serious user would want to upgrade. Currently it costs either $12 a month or $8 a month if you commit to a year. I’ve used a variety of public domain resources to accomplish some of the capabilities MotionBased provides (see my story here). But, MotionBased makes it much easier and has more features already. I think Garmin has made a very smart move. And the guys at MotionBased are probably walking on clouds. I hope Garmin treats them well.