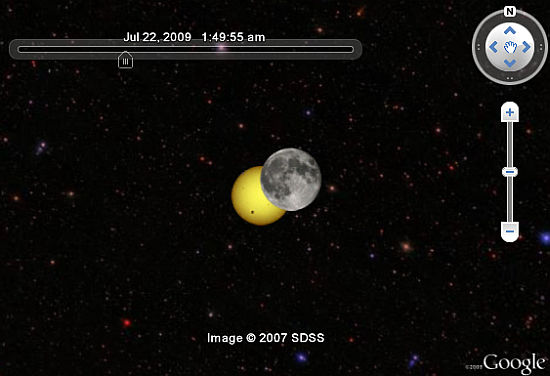 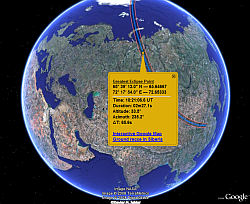 Just a week before the 2008 China Olympics, there will be a total solar eclipse occurring on the first of August which crosses China, Mongolia and central Russia. The best web resource I’ve found on eclipses (solar and lunar) is by Xavier Jubier. Here is his web page with all the details on the 2008 August 1 Total Eclipse including links to his Google Earth KML file of the total eclipse path

. Much of Europe will also see most of the sun covered on this day. Xavier also has a Google Maps version of the map, and his web site is also available in French.
See the earlier GEB story on visualizing Solar Eclipses. Xavier also has a page showing Google Earth files of total eclipses from 1961 through the rest of this century. 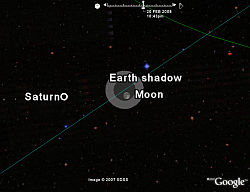 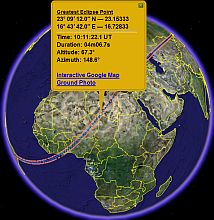 Recently someone contacted me with some interesting Google Earth files which show solar eclipse paths (where the eclipse is viewable on the ground), both total and annular (for information on solar eclipses see this Wikipedia article). His web site contains a few historical ones dating back to 1961, but is mostly focused on near-term (those in this century) future eclipses. The next total solar eclipse is only 76 days away on 29-March-2006 and crosses over a lot of land mass from southern Russia, across Kazahkstan, Turkey, and right across north-central Africa. Here is the 29-March-2006 Total Eclipse

path for Google Earth. Now you can plan your trip with Google Earth for the best location to view the Eclipse, find an airport, make hotel arrangements, figure out which geocaches are nearby, etc. Thanks to Xavier Jubier for creating the GE files and informing me about them. Also, his data came from Fred Espenak, at NASA/GSFC.
By the way, last October someone at the Google Earth Community, calling himself ‘yaohua2000’, posted a huge repository of all the solar eclipses (4.7 Mbytes)

since the year 1001 for GE. WARNING: this might take a while to load (4.7 Mbytes), and your Earth will look like a yarn ball after it loads (he defaults with all the eclipse paths turned on). I recommend after it loads you find the placemark folder in your Temporary Places folder called “Eclipses” and turn it off. Then open the folder and turn on the type and year of eclipses you want to see (it is well organized hierachically). This is a very interesting collection of data. I was able to find a total eclipse I saw as a child (a long time ago).