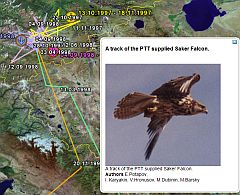 [Update 1:55PM: It turns out instead of GPS, they used a doppler technology called Argos for tracking the birds]
Using technology to follow the movements of birds, animals and fish is an interesting application of technology. It is fascinating to me to see the places other species will travel. Recently, someone from Russia who calls himself “Valery35” at the Google Earth Community, has published tracks of birds in Russia

as they migrate so you can view them in Google Earth.
Once you download the GE file above, you will need to open the “Birds” folder in your Temporary Places and turn on the tracks for the different birds. I found it particularly fascinating to watch the Stellar Sea Eagle as he migrated south along the east coast of Russia, stopping for a while at presumably the best hunting grounds along the way. Some of the birds have a photograph and the datasources are documented in a placemark description. Good work Valery35! Cpacibo! 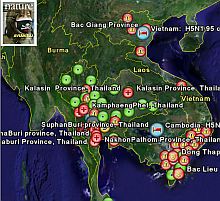 includes Human cases, and a time series of placemarks showing the progression of the flu over the last 18 months. Here is Declan’s web page describing his outbreak map and the background information on the data provided.
About two weeks ago I published a similar outbreak map. The older one is based on various reported cases, but not all confirmed, and is not as complete. I recommend Declan Butler’s outbreak map for accuracy. 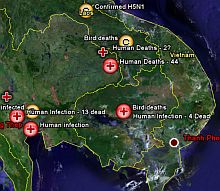 Someone called “purplelinny” at the Google Earth Community has been collecting information on the spread of Avian Flu around the world. She cites her references in the thread and has been in contact with a journalist at Nature who has been researching this as well.
You can download the Google Earth file

and you will see the placemarks with unique icons indicating ‘confirmed’, ‘unconfirmed’, or human verses animal or bird cases. If you look in the Places window and open her folder (called H5N1 after the name of the flu strain), you will see it is organized according to the different types and other useful infromation about the flu.
Check out the Avian Flu thread where purplelinny posts updates to the GE file and information about the flu outbreak. If you like this work, you might want to drop a note saying so. Great work purplelinny!

Casper at Thinklemon.com has released a couple of new variations on his collection of Impact Craters (aka Craters) which I wrote about earlier. He announced on Monday this week Google Earth files for the most recent impact structures and the oldest impact structures. You should read his announcement because he provides some perspective on these new variations. Or, if you are impatient, you can download the most recent craters

, or the oldest craters 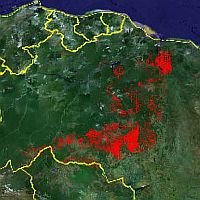 A research paper has been published by the Carnegie Institution of Washington which reveals the amount of tropical forest degredation due to logging has been underestimated by half. Loggers have been secretly entering the forests and selectively cutting down trees under the tropical forest canopy one by one. The scientists have developed a method to penetrate the forest canopy and using computational methods combined with on-ground studies they can detect the forest degredation. Carnegie’s Dr. Gregory Asner says: “Selective logging negatively impacts many plants and animals and increases erosion and fires.”
This photo from the research paper shows a Google Earth screenshot with an image overlay showing the extent of the selective logging. Dr. Asner was unable to provide the Google Earth image overlay to me at this time due to publishing issues. I hope this research paper helps raise awareness of the terrible destruction of countless species of plants, insects, and wildlife due to logging. There is also scientific evidence that deforestation is damaging our atmosphere (carbon dioxide).