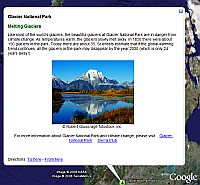 Today Google’s Logo was changed to reflect Earth Day, and the logo takes you to a search for Earth Day activities. More importantly, they announced Earth Day at the Official Google Blog and that they have worked with Scholastic (makers of “Clifford the Big Red Dog” ) to distribute Earth-day related lesson plans for middle-schoolers across the US using: Google Earth. The Google Blog says:

Using Google Earth, teachers can fly their students around the world to talk to them about issues like climate change and how it has affected places like Glacier National Park, the Chesapeake Bay and Los Angeles. And they can introduce students to community initiatives across the country where volunteers are cleaning up their cities, planting trees and beautifying. Using Google Earth, teachers can show their students placemarks of the towns where outreach projects are taking place and students can get involved in cleaning up their own environment.

END_OF_DOCUMENT_TOKEN_TO_BE_REPLACED

The importance of coral reefs to our world’s ecosystem is not understood well by the majority of the population. However, more people should become aware because these vital elements to the ecosystem are in serious trouble. The National Oceanic & Atmospheric Administration (NOAA) is well aware of the importance of Coral Reefs and their dire straights and has an excellent web site called NOAA’s Coral Reef Watch to provide tools to the public for tracking near-real-time data important to the environment of coral reefs.

sea surface temperatures, anomalies, hotspots, and other data around the world. After I contacted them, they changed the files to network links so you can automatically have updates to the current information.
By the way, the photo here is of a beautiful coral reef I saw while snorkeling near St. Barts in the Caribbean – January 2003. You can see some other underwater photos I’ve taken.

One of the Google Earth Community (GEC) members called ‘Gerardo64’ has been compiling a list of links to posts related to issues involving the ecology of Earth. This is a good idea, because there is currently no better program for visualizing problems with our planet than Google Earth. You can see his list of links in his post here, which include issues such as deforestation

, temperature anomalies, glacier melt, coral reefs, and even light pollution. There are some good collections in his list, some written about here at the Google Earth Blog (GEB) include: Hidden Logging in Amazon, Environmental Groups Using GE, Sierra Club and Public Land Sale, and Satellite Environmental Data. 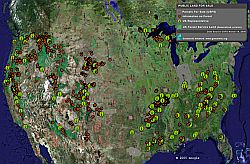 The Sierra Club has created a Google Earth file providing information about a proposed plan by the US government to sell 800,000 acres of its own public lands to fund a program. While the program may be important (funding for schools), I don’t think I’m the only US citizen who thinks selling our public lands is the way to fund government programs. Especially when you view the number of parcels and exact locations of the proposed lands in the satellite and aerial photos of Google Earth. Most of the proposed parcels of land fall within National Forests and are pristine areas with primeval forests with mountainous terrain and untold amounts of wildlife and other plants and organisms important to our environment. See for yourself, load this Sierra Club GE file

and you can easily see the extent and type of land we would be giving up. There’s no better way to see what this land sale proposal consists of other than driving out to see the lands yourself.
The public comment period on the proposal is open through March 30. If you are like me, a US citizen and against this proposal, then take action now. There are more details on the proposed sale at the Sierra Club here. This also includes a place to sign a petition. The file shows the congressional representatives and the number of acres proposed in their districts. You should also contact your congressional representative about your lands. 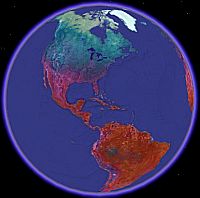 As promised, here are some more environmental time-progression satellite data which were posted by Valery35 at the Google Earth Community during the past few days. In this collection, we start with the corresponding data to the Day Land Temperatures of the Earth now with the Night Land Temperatures. In addition, Valery posted data on the Biosphere, Leaf Area Index, and Vegetation Index. Once again, all of this data came from NASA’s Moderate Resolution Imaging Spectroradiometer (MODIS) satellites Terra and Aqua. The data is shown here as image overlays draped over the satellite photos on Google Earth. Open each Google Earth file and then open the folders for each year and you will see the months which contain each image overlay. If you turn on an entire folder it will load all the images in that folder at once – it is better to turn on and off each month. You can see the progression of temperture, the biosphere, and vegetation during the seasons. You may even notice how the environment has changed during the past few years.

Valery hasn’t created videos to show the time progression like he did with the Day Land Temperature data. But, someday Google will hopefully release a time-progression feature in Google Earth. We will then be able to look at this data as an animation.