Yesterday we had a look at what appears in Google Earth placemark popups for placemarks in the “Borders and Labels” layer. Today we are looking at places from the “Places” layer.

The information shown in the placemarks comes from Google Maps and is largely identical to what you see in Google Maps, but often not as nicely formatted. Some information, including the name, address, phone number, website and working hours can be edited via Google Map Maker. Also, the category of the location can be set there (e.g. Airport, School, Hospital, which also determines the icon used in Google Earth). It doesn’t seem to be possible to set the photo in Map Maker. As far as we can tell, the photo displayed is typically the default automatically selected image from Street View (which includes and prioritises user contributed photos). 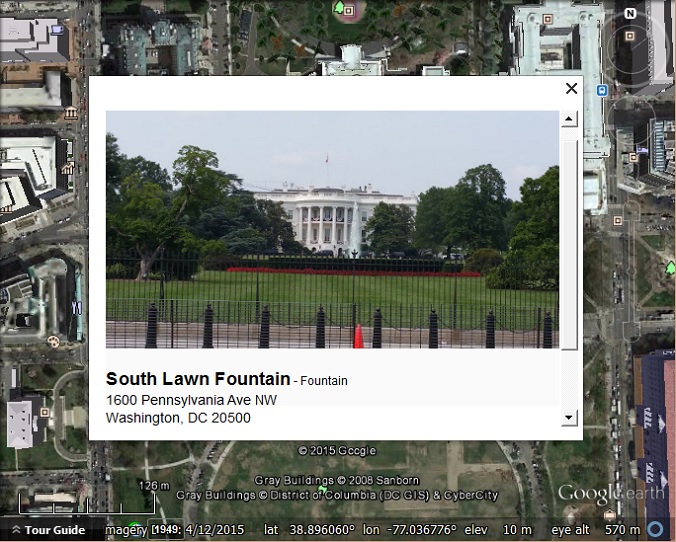 The White House South Lawn Fountain has its own placemark, including a phone number and reviews.

As seen above, the Google Earth popups tend to add a scroll bar when the photo is too big, so many placemarks require you to scroll down to see all the information, even when there is plenty of screen space.

We found that for some special types of places, the popups are broken in Google Earth. For example, some train stations and bus stops have schedules available in Google Maps but in Google Earth it doesn’t show all the information correctly. Given that Google Earth has a very capable browser built in there is no good reason why the schedule functionality could not be fixed (hint to Google). 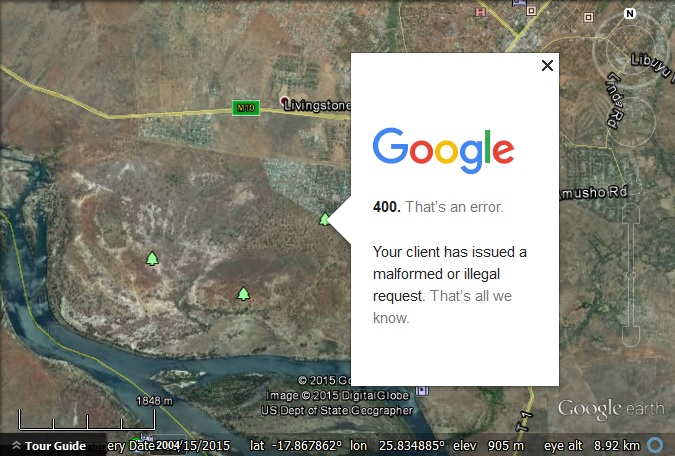 We found some places that give an error message in the popup. We believe this is because the placemarks are ported to Google Earth rather infrequently and the placemark has been deleted in Google Maps but the change has not yet been carried over to Google Earth.

If you own a business or are an authority for one of the institutions marked with a placemark, then the best way to ensure your information is correct is to sign up for Google My Business. It is free and essentially gives you a Google+ page where you can fill in all the details of your business, including changing the photo that is displayed and adding extra photos. For best results, you should also verify your address. To accomplish this, Google sends a postcard with a special code to your address, which you then enter into Google My Business to confirm that you received it.