A couple of days ago Google introduced some new layers to Google Earth in honour of Google Earth’s 10th anniversary. Yesterday we looked at the ‘Satellite imagery updates’ layer. Today we are looking at the ‘Earth View landscapes’ layer.

The collection of imagery has been expanded and now includes around 1500 images. If you don’t want to install the extension, or don’t use Google Chrome, you can still view the images in Google Earth using the new layer, and optionally download them for use as computer wallpaper. Alternatively, you can view them via the new Earth View Gallery website. If you use a browser other than Chrome, you could try setting that site as your default new tab. Also check out ‘lean back’ mode from the drop down menu at the top left of the site.

One noticeable change to the Chrome extension is that the logo has been changed from Google Maps to Google Earth. This is fitting, as much of the featured imagery is from the ‘historical imagery’ layer of Google Earth and cannot be found in Google Maps. We did find that most of the imagery can be identified in Google Earth, although the colours often do not match exactly. Either they have touched up the colours for the Earth View gallery, or they have used original imagery and not what is in Google Earth, which may be colour corrected.

We also discovered that there are a few images from Google’s Skybox Imaging that will not be found in Google Earth and whose locations are not marked in the new layer. 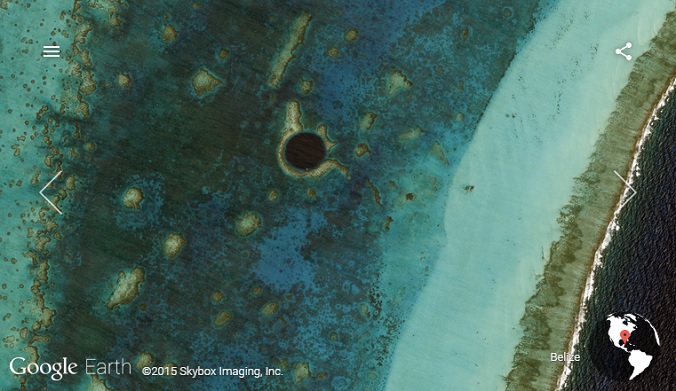 The circle in the centre of the image is known as “The Great Blue Hole” and has its own Wikipedia page.

The image above is from Skybox Imaging and is not found in the new layer. Find it here in the Earth View Gallery or download this KML file

One small shortcoming of the new layer is that there is no obvious way to share a nice image you have found. In the Chrome plugin there is a ‘share’ menu, but no such links are in the Earth View layer popups. If you wish to tell someone else about a nice image from the Earth View layer, download it as wallpaper and take note of the 4 digit number at the end of the file name. Append the number to the URL of the Earth View Gallery and it will display the correct image. For example, the above image downloads as “google-earth-view-7022.jpg”. Just enter “https://earthview.withgoogle.com/7022” in your browser and it will find it.