Yesterday we looked at Google’s Imagery Updates map and what it tells us. We mentioned that the imagery being added is not always current imagery. So you may be asking why Google would add old imagery and why imagery is not always added to the default layer.

Google gets its imagery from a variety of sources. Google captures quite a lot of aerial imagery itself, especially in the US and Europe, including, we believe, the imagery used to create the new 3D imagery. However, a large amount of the aerial imagery that can be found in Google Earth was obtained from other sources. For example, the US has a complete set of black and white imagery mostly captured in the 1990s, provided by the U.S. Geological Survey (USGS) and more recent imagery from the United States Department of Agriculture (USDA) Farm Service Agency.

Google gets its satellite imagery from providers such as Digital Globe and Airbus Defence and Space and for the low resolution image used when you zoom out, Landsat imagery is used. If you look at the copyright notices in Google Earth you can tell where the imagery comes from. Note that many of the copyright notices refer to the sources of other map data, such as the street maps or ocean floor data.

We don’t know the exact details of any agreements Google has with the imagery providers, but presumably many of the providers wish to sell imagery to their customers first, before making it essentially freely available in Google Earth. So if you want up-to-date imagery of a specific location, you will need to purchase it directly from an imagery provider. Only a small fraction of the imagery they capture ever makes its way into Google Earth.

When Google receives imagery, it assess both the age and quality of the imagery and decides whether it is better than the imagery currently at that location in Google Earth. If Google Earth already has aerial imagery that is of higher quality, newer satellite imagery will often be put straight into ‘historical imagery’ leaving the aerial imagery as the default. So if you notice an area has fairly old imagery and you want something newer, be sure to check ‘historical imagery’ to see if there is anything more recent available.

Another common reason for adding imagery only to the ‘historical imagery’ layer is when it is of poor quality, but something of interest. In some cases such images really stand out due to the large amount of cloud cover. 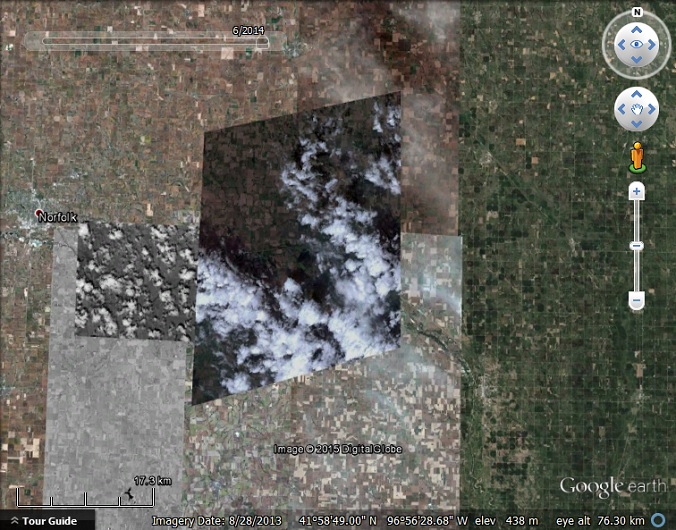 An unusual patch of cloudy imagery.

If you see something like the image above in ‘historical imagery’ then it is likely there was something of particular interest at that location. In this case, is was damage caused by a tornado that hit the town of Pilger, Nebraska.