If you’ve cruised around the United States in Google Earth a lot, you’ve likely encountered some strange barcode-looking patterns in various places. A good example comes from Walker Field in Maryland. 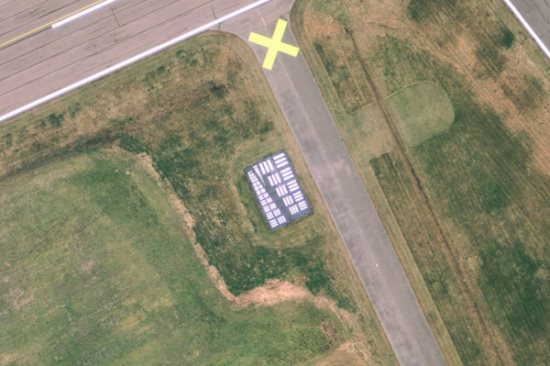 Most of them follow the same general form established by the Air Force and NASA (and prior to 1958, its precursor agency, NACA): a concrete or asphalt pad constructed flat on the ground, 78 feet by 53 feet, coated in a heavy black and white paint. The pattern painted on the targets is sets of parallel and perpendicular bars duplicated at 15 or so different sizes, and, sometimes, a large white square. The configuration is sometimes referred to as a 5:1 aspect Tri-bar Array, and follows a similar relative scale as a common resolution test chart known as the 1951 USAF Resolving Power Test Target, conforming to milspec MIL-STD-150A. This test pattern is still widely used to determine the resolving power of microscopes, telescopes, cameras, and scanners.

The targets function like an eye chart at the optometrist, where the smallest group of bars that can be resolved marks the limit of the resolution for the optical instrument that is being used. For aerial photography, it provides a platform to test, calibrate, and focus aerial cameras traveling at different speeds and altitudes. The targets can also be used in the same way by satellites.

According to Popular Science, the pattern was deemed “outdated” in 1998 and it was official retired in 2006.
The technology isn’t useful to digital cameras, so these installations will continue to erode and fade away over the years as evidenced by the brush beginning to break the bars in Cuddleback Lake.
What are some your favorite odd man-made objects like this in Google Earth?