Frank Taylor here, the founder and publisher of Google Earth Blog. Many of you who are regular readers of Google Earth Blog know that since November of 2009 my wife and I have been traveling by sailboat on a round-the-world trip we call the Tahina Expedition. Tahina is the name of our boat which we bought in 2008. We sold our house, cars and most of our belongings to have this opportunity to see many of the most remote parts of the Earth that we had only visited in Google Earth before. We have already crossed the Pacific Ocean leaving our home state of North Carolina to the Caribbean sea, to San Blas, the Panama Canal, Galapagos, French Polynesia, the Cook Islands, Niue, Tonga, and New Zealand.
In early May of this year, we left New Zealand and sailed for seven days up to Fiji. Since that time, we have had some amazing experiences in Fiji. We have enjoyed visiting with people in remote villages of eastern Fiji – many who have rarely seen foreigners and have little contact with the modern world. We have had some amazing underwater experiences on some of the liveliest coral we have ever seen. We have had remarkable encounters with marine life such as dolphin, sea turtles, lionfish, shark, sea snakes, eels, manta ray and more. We have also seen some pretty unique locations such as underwater caves, uninhabited islands, white sand beaches, and huge island resorts. 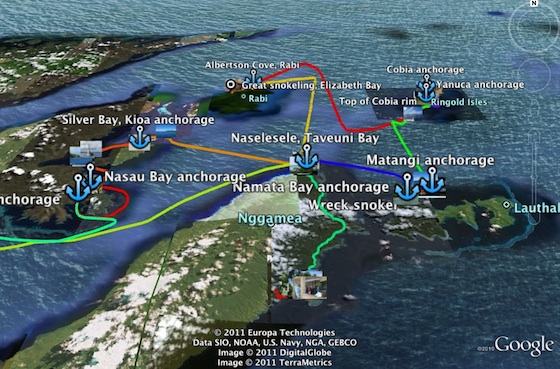 Today we published a Google Earth file of our Fiji experiences

. It includes GPS tracks of our routes as we sailed between anchorages. It also has tracks of dinghy trips to various places, hikes, kayaking trips, and even some taxi trips. There are placemarks of our anchorages, dive sites, and other points of interest along the way. And, finally, the file includes links to all the geo-tagged photos from albums we have published to Picasa. You can read more about the file in the post at the Tahina blog.
For those of you who don’t want to wade through 3 months of blog posts about our stay in Fiji, here are a few of the more interesting stories from Fiji with lots of photos: