[UPDATED] Another major new feature in Google Earth 5 is the new Record Tour feature. This is NOT recording video. Instead it is a major new capability for GE 5 that lets you record and play back scripted KML sessions. This means you can record things you want to show to a KML file, pass the KML file around and let someone else view it with their GE 5. This is way better than a video because you have the full resolution fidelity for a way smaller file than a video. And, there’s a lot more under the surface here than what you might think at first glance.
I’ve created a quick demonstration recording. The first thing you’ll notice is that I’ve also recorded a voice narration to my playback. You start by clicking on the “movie camera icon“, or selecting “Add->Tour” from the menus. Notice the “microphone” button next to the “record” button. When recording, the record button turns red and a counting timer appears.

When you select the “microphone” gadget, it will record your voice and record your movements in Google Earth. (NOTE: you can add a narration after you record a movement session as well). The other thing you should notice is very exciting to me: while the tour is playing back, you can reach with the mouse and click and drag your view (NOTE: only if you drag the ground, not the sky) to look in a different direction than the playback! This is just one example of why the Record Tour is more powerful than a video. Before I go further, download this Grand Canyon tour

(with narration – only 1.1 Mbytes). You may have to open the “Grand Canyon Tour” folder and find the record tour – then double-click it to start the playback. Here’s a screenshot of the tour in action: 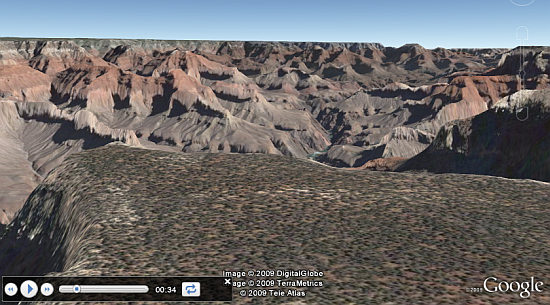 One thing you can play with is speeding up, slowing down, or going backwards with the playback (at the expense of making my voice sound even funnier than normal!). Just click on the speed buttons on either side of the “Play” button in the record tour panel. Also, you’ll notice I’ve included a couple of placemarks which I opened during the recording. They also open during the playback. Very useful for illustrating a tour!
[UPDATE: Google has put up a post about historical imagery with some video of example tours. You can also download KML of the tours they show so you can play them in GE 5. Try this tour

where they show different historical imagery of stadiums in Philadelphia during playback.]
Here are some other possibilities with the new touring:

There are many other possibilities including automatically playing back a GPS track, or how about adding music to your recorded tour? You may have to delve into the KML code to take advantage of more advanced features. Here’s the new documentation on Record Tour at the KML documentation site. There are a lot of possibilities with Record Tour.