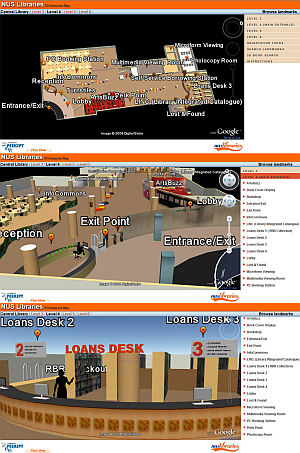 A Singapore-based company called Peekspy has used Google Earth technology in an innovative way. Instead of just showing the normal Earth map or an exterior 3D building, they are instead using Google Earth technology to provide a 3D architectural walkthrough of the inside of a building. Really, its like a 3D tour guide of the interior of a building. They chose to use the new Google Earth plugin to present their building tour which lets you present 3D content in a browser window and put your own interface around the Google Earth window.
The building shown is the National University of Singapore (NUS) library and the 3D model is quite detailed with all kinds of photo textures to add realism. Click here to view the NUS library 3D Tour

This application might be a bit slow on older computers (or with slow video cards) because it is 3D intensive. They “blank out” the Earth view in Google Earth and all you see is a 3D model of one level/floor of the library. Give it a moment or two to load. The first view is level 4 of the library, if you click “Level 4” on the list on the right, you’ll get a list of places you can view on that floor. Click on one and it will fly you to that part of the floor. This is using Google Earth’s built-in touring capabilities to help conduct a “walkthrough”. You can also use the Google Earth navigational controls to move around, but it can be awkward with the current setup. I think if they scaled up the building size you could use the controls to “walk around” better.
Google Earth wasn’t designed to provide 3D tours of the insides of buildings. One reason it takes a moment to load the library model is that Google Earth is still loading the background 3D terrain and imagery (even though you can’t see it). But, Peekspy has shown GE can be used for this. And, I think it works pretty well. Tools like the 3D modeling software Google SketchUp were designed to provide 3D building tours. However, I would guess there are more people familiar with Google Earth than any other 3D mainstream application. I’m always amazed at the multitude of different applications of GE technology. A real 3D tour of the inside of a building is pretty slick!